This month we welcomed the veterans of the USS Wisconsin back to her homeport of Norfolk.  The famed Iowa-class battleship is berthed at Nauticus on Norfolk’s downtown’s waterfront.  We were also honored to host the Chosin Few in our hometown – celebrating the 68th anniversary of the Chosin Reservoir Campaign in Korea.  Colorado Springs was a popular destination too, as we hosted the Third Marine Division Assn, the U.S. Seagoing Marines Assn., and the USS Iwo Jima Class reunion.  One normally associates Colorado Springs with the Air Force, it being home to the USAF Academy.  But it’s a great city for all branches of the military.  A unique attraction is Dragon Man’s Military Museum, Mel Bernstein’s personal museum that rivals nearly any military museum in the country.  The photo here is Mel welcoming the Third Marine Division vets to his “home.”

Our Featured Veteran this month is Jean P. White, who served with the 1st Marine Division in the storied battle of the Chosin Reservoir.  I had the honor of being with Jean and his fellow comrades of “The Chosin Few” this month in Norfolk.  Surrounded by 120,000 Chinese troops in 1950 during the coldest winter on record in Korea, General Oliver P. Smith, the Commanding Officer of the 1st Marines during the Battle of the Chosin Reservoir, was asked if he was retreating.  His famous response: “Retreat, hell! We’re not retreating, we’re just advancing in a different direction.”

The Top Destination this month is Portland, OR, which sits in the shadow of snow-capped Mount Hood and is known for its parks, bridges and bicycle paths.  Tour through the magnificent Columbia River Gorge and take the old scenic highway past Multnomah Falls, the highest of numerous falls seen along the Columbia River Gorge.

The Must-See Museum this month is the USS Alabama Battleship Memorial Park is a military history park and museum located on the western shore of Mobile Bay in Mobile, Alabama. It has a collection of notable aircraft and museum ships including the South Dakota-class battleship USS Alabama and Gato-class submarine USS Drum – both of which are National Historic Landmarks.

Remembering and Celebrating the Chosin Few on their 68th Anniversary 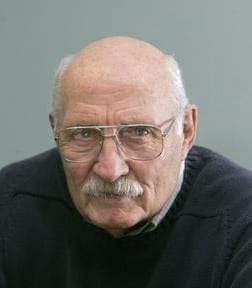 A lone star that appeared during a fierce, sub-zero snowy night battle in North Korea was a glimmer of hope that later became the symbol of the heralded Chosin Few, but Marine Sergeant Jean P. White and the 1st Marine Division were far from being out of the cold.

Enlisting in 1945, White was to be deployed to Japan, but they surrendered while he was in boot camp.  On liberty from Camp Pendleton in late June, 1950 he heard North Korea had invaded the South.  “After World War II President Truman had reduced the Marine Corps divisions from six to two, so it became a rush job to get troops into place,” said White. 91.  “We arrived in Korea just after the Inchon Landing and helped in the recapturing of Seoul before moving toward the 38th parallel.  We got pinned down in a creek bed at Uijeongbu, where I was hit in the thigh and nose from an artillery round and evacuated to a Naval Hospital in Japan.  I had no idea of what was to come.”

White recovered and rejoined Item Company, 3rd Battalion, 7th Regiment in North Korea for the offensive at the Chosin Reservoir.  After Inchon, the1st Division was down to only 15,000 Marines and in early December was surrounded by 120,000 Communist Chinese and ordered to leave the reservoir and head 80 miles through ravaged roads to the coast and transport ships.  “The bulk of the division was on the road and we had to cover their flanks, “said White, 91.  “It was mostly small arms and mortar fire from the hills, but ferocious fighting nearly the whole time as we headed first for Hagaru and then Koto-ri.  The ground was so frozen so we couldn’t dig in and just had to lie there, sometimes using frozen bodies as shields.  We were down to about 30 men in Item Company south of Koto-ri when a star came through the snow and an amateur country singer in our company later wrote the song “The Star of Koto-ri” as a memory of hope and inspiration.  It was the impetus for the organizational emblem of the Chosin Few.” 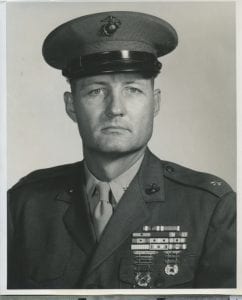 Korea.  White’s feet were so frostbitten he had to be flown to a hospital in Japan and then to the states for care.  About 98,000 North Korean refugees also left.  Noting division commander General Smith’s quote, “Retreat hell, we’re just attacking in another direction,” White said: “When surrounded you fight you’re way out and that was to the ocean for us.”

The war ended with the Korean Armistice Agreement in 1953, with the battle at the Chosin Reservoir already becoming legendary in Marine Corps history.  There were 718 KIA, 3,508 wounded and 7,313 non-battle casualties (mostly frostbite) in the 1st Marine Division, while the Chinese lost estimated over 35,000.  Fourteen Marines received the Medal of Honor for their service, seven of them posthumously.

After recovering, White returned to duty and was promoted to Staff Sergeant.  By 1953 wartime casualties left the Marine Corps with a shortage of junior officers, so many staff NCOs were given temporary commissions as 2nd lieutenants. He graduated in the top 25 of a class of 1,005 at the Basic School in Quantico and made 2nd Lieutenant.  He received a permanent commission and promoted to 1st Lieutenant and then Captain.  In 1966 he was sent to Vietnam as a Major and Executive Officer in charge of defending the 1st Battalion, 5th Marine Regiment base at Que Son.  “We saw plenty of action, but this time in stifling jungle heat.  Still, it wasn’t as rough as Chosin,” he said. White retired in 1975 as a Lt. Colonel. Among his medals are the Bronze Star Medal w/combat ‘V’ for service in Vietnam, Navy Commendation Medal w/combat ‘V’ in North Korea and the Purple Heart Medal for combat wounds received in South Korea. 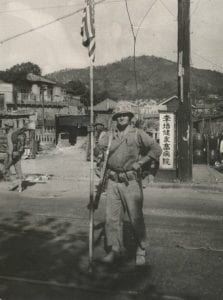 The costly, harsh but proud memories of the battle were formally gelled when Marine veterans organized the Chosin Few association and held its first reunion in 1985 in San Diego.  The group holds gatherings at destinations across the country and White served as National Director for several years.  Armed Forces Reunions, Inc. managed their reunion earlier this month in Norfolk, which celebrated the 68th anniversary of the battle. “We’re now getting up in age and smaller in numbers, but Norfolk was exceptional,” said White, who lives with his wife Paulette in Vista, California.  “What was really special this time was that CBS Sunday Morning came and did a story about us on September 9th. It was quite a tribute and a very proud moment for all.”

Among the banter shared at the reunion was North Korea’s recent return of American remains and denuclearization negotiations.  “I’m glad they returned some of the remains of our fallen comrades, but I am sure that there are many more that can be found,” White said. 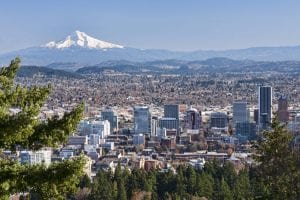 Portland sits in the shadow of snow-capped Mount Hood and is known for its parks, bridges and bicycle paths, as well as for its eco-friendliness and its microbreweries and coffeehouses.  Highlights include the Forecourt Fountain opposite the Civic Auditorium, Salmon Street Springs in Waterfront Park, and Pioneer Courthouse Square, Portland’s outdoor living room.  In Washington Park walk through the world-renowned International Rose Test Gardens, which boasts 10,000 varieties of roses planted on three terraces.  Visit the Pittock Mansion, a twenty-two room French Renaissance mansion with a panoramic view of the city.  Tour through the magnificent Columbia River Gorge, view the basalt cliffs thousands of feet high and take the old scenic highway past Multnomah Falls, the highest of numerous falls seen along the Columbia River Gorge.

Travel west through fir forests and the Coastal Mountain Range to Cannon Beach, a shoppers’ and 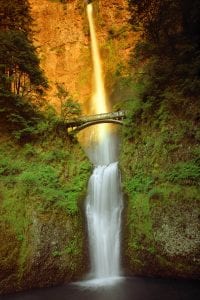 art lovers’ paradise.  Explore 200 years of Pacific Northwest maritime history as guides take you through exhibits on shipwrecks, fishing, sailing vessels, and naval history.  See the actual navigation bridge of the WWII destroyer USS Knapp and go on board the lightship Columbia, the last U.S. Coast Guard lightship to serve on the West Coast.  Also of interest is the Evergreen Aviation and Space Museum, located in McMinville, OR.  View displays ranging from the elegant aeronautic designs of two unknown bike mechanics – Orville and Wilbur Wright – to an actual Lockheed SR-71 Blackbird that can fly at speeds of over 2,000 miles per hour.  The centerpiece of these aeronautic breakthroughs is the original Spruce Goose.  Built entirely of wood due to wartime restrictions on metals, this massive airplane stands as a symbol of American industry during World War II.  Other popular exhibits include the B-17 “Flying Fortress”. WWII Aircraft, Titan II Missile, and the Firearms display. 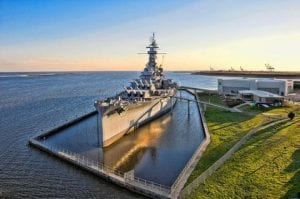 The USS Alabama Battleship Memorial Park is a military history park and museum located on the western shore of Mobile Bay in Mobile, Alabama. It has a collection of notable aircraft and museum ships including the South Dakota-class battleship USS Alabama and Gato-class submarine USS Drum – both of which are National Historic Landmarks.  Home to a crew of 2,500 courageous Americans, the 45,000 ton gentle giant’s WWII adventure culminated with BB-60 leading the American Fleet into Tokyo Bay on September 5, 1945.  Nine Battle Stars for meritorious service were awarded the “Mighty A” during her brief three-year tenure as the “Heroine of the Pacific”.  The DRUM is the oldest American submarine on public display, and we invite you to come and learn about her 72 member crew and her missions during the war.

Dedicated to all Alabama Citizens who have worn the uniform of all branches of the United States Armed Forces, the Park’s numerous artifacts, exhibits, and displays all point to the fact that the Park is America’s most unique military attraction.  The Medal of Honor Aircraft Pavilion is home to an extensive aircraft collection, historic vehicles and war artifacts, and features a memorial wall that pays tribute to these heroes.  One of the newest additions to the collection is Marine One, a recently restored VH1-N/ Bell 212 helicopter used by Presidents Nixon, Ford, Carter, Reagan and George H. W. Bush.  Tanks, boats, planes, memorials, and artillery dot the scenic surroundings at Battleship Memorial Park.  Several iconic tanks from World War II, Korea, and the Vietnam Wars are included in the collection.  You’ll find a M-26 Pershing tank, a M-4 Sherman, M-48A 1 Patton, and a M-60A 1 tank.  Also included is a T-55 Russian/Iraqi tank from Desert Storm.