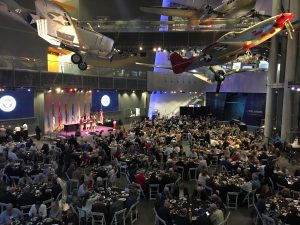 In late September AFR had the honor of hosting the 8th Air Force Historical Society (8AFHS) in New Orleans.  Several days were spent touring the National WWII Museum. There were over 70 veterans present and with family and friends we had over 500 in attendance. 8AFHS is actually the one WWII era group we handle that is getting larger with each year. Bomb groups and fighter groups that once met on their own now fold into the Society’s umbrella organization, giving vets a chance to share stories with others of the Greatest Generation. The final banquet was held in the Museum’s Boeing Center (see photo), with period entertainment and planes hanging overhead. The first 8AFHS reunion we planned was in Chicago in 1993. The Memphis Belle movie had just come out and the cast visited to meet with the Belle’s original crew. Next year the reunion will be in Dayton, OH and we’ll visit the National Museum of the USAF to see the newly refurbished Memphis Belle.

the largest naval training center in the U.S. AFR just hosted a very successful USS Bennington reunion in Lake County. Our Featured Veteran this month is George Dingledy, member of the Americal Division Veterans Association.  I met George at the group’s reunion in Bloomington, MN in August. The Must-See Museum highlighted in this issue is the Pima Air & Space Museum in Tucson – a very hot reunion destination. The museum sits on eighty acres with six large hangars totaling nearly 200,000 square feet of indoor exhibit space to explore, in addition to the vast bone yard with thousands of aircraft. 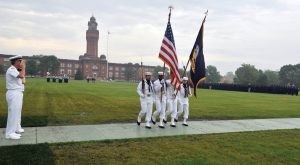 Looking to enhance the enjoyment and prominence of your next reunion? Consider beautiful Lake County, Illinois. Located just north of Chicago – and easily accessible from nearby airports – Lake County is one of the Midwest’s premier destinations, with world-class attractions, scenic locations and relaxing venues. And with over 60 reunion-friendly hotels – ranging from three hotel-resorts to top-rated hotel chains – you’re sure to find the perfect option for any budget.

As the home of Great Lakes Naval Training Station, the largest naval training center in the U.S., Lake County, Illinois provides the perfect military reunion setting. For over 100 years, we’ve been welcoming veterans for work and play. We can arrange for your group to tour the base, attend a graduation ceremony, break bread at the Port O’Call overlooking Lake Michigan, and visit the Great Lakes Naval Museum. Take a tour of nearby, historic Fort Sheridan or experience the Volo Auto Museum’s Combat Zone military exhibit, featuring rare military equipment and hardware.

Enjoy a tram ride through the spectacular grounds of the Chicago Botanic Gardens. Shop for provisions along the cobblestone lanes of Long Grove Historic Village. Spend the evening enjoying a live musical or theatrical performance at the Marriott Theatre, Genesee Theatre or Ravinia Festival. And if you’re looking for a boating adventure, Waukegan Harbor on Lake Michigan has one of the finest charter fishing fleets on the Great Lakes.

If the Windy City is in your plans, Chicago’s world-renowned attractions are just a short train or bus ride away. Visit the Shedd Aquarium and Adler Planetarium. Stop at Soldier Field, home of the Chicago Bears, to pay homage at the many military memorials on the site – including the 250-foot long Memorial Water Wall. Take an architectural cruise departing from historic Navy Pier. And visit the WWII German U-Boat U-505 at the Museum of Science and Industry. At night, enjoy yourself at the Roaring Twenties-style speakeasy and cabaret, Tommy Gunn’s Garage.

MEET OUR VETERAN OF THE MONTH:
164th INFANTRY STAFF SERGEANT GEORGE DINGLEDY OF THE AMERICAL DIVISION

Remembrances of Winning the Pacific and the Occupation of Japan 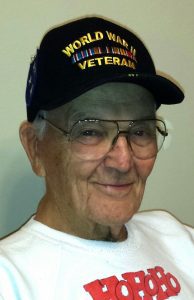 Assigned to the island of Viti Levu, Fiji in 1943, 19 year-old George Dingledy was among nearly 1,100 U.S. Army soldiers sent to reinforce the 164th Infantry Regiment of the Americal Division, which had sustained heavy losses in fierce fighting at Guadalcanal. A private first class and rifleman in Company F, Second Battalion, Dingledy was soon transferred about three miles away from the infamous battle site to Bougainville in the northern Solomon Islands. Their mission was to secure the perimeter for three airfields taken from the Japanese earlier in the year, and also to keep the enemy at bay on the rest of island.

“Ace Pappy Boyington and his Black Sheep Squadron were flying missions over Bougainville and inflicting heavy casualties on the Japanese, actions that helped him earn the Medal of Honor,” said Dingledy, 93. ”It was our job to regularly patrol around the airstrips and into the jungle and mountains. We used passwords with an L in them because the Japanese had a tough time pronouncing the letter, but we rarely encountered the enemy. When we did it was usually from a distance and we called in our 155 mm canons. In early March they tried to launch a campaign to drive us from the island with prolonged artillery attacks. They ran out of ammunition and our spotters had good success identifying their positions and taking them out.”

Dingledy spent about 13 months on Bougainville and while combat was limited he did have a close call: “A buddy of mine and I were on daylight patrol when a shell landed right between us. It turned out to be friendly fire from our guys and fortunately didn’t detonate. Either we had walked too far or our artillery fired too short, but we were lucky as hell is all I know.”

Sent to Leyte, Philippines during General McArthur’s return to the island chain, Dingledy was assigned to keep records at battalion headquarters because he could type: “I never saw the general in the Philippines, but I saw him after the war on the campaign trail, a truly larger than life figure.” Dingledy was in Cebu City, Philippines with the 164th when they learned the bombs had been dropped and the surrender signed. After a raucous nighttime celebration of ordinance detonation they soon began packing for occupation duty in Japan.

“Basically we were the first seaborne troops to come in and were stationed in a camp near Tokyo,” Dingledy said. “We were there to keep the peace, but the Japanese were pretty docile by that point and posed little problem. Within about a week or so we’d go sightseeing in the city – what was left of it.”

Dingledy received the Bronze Star, Combat Infantry Medal and left the Army in 1945 as a staff sergeant. He returned to the states, graduated from the University of Tampa with the GI Bill and took a job at Sunbeam. He later owned an appliance store in Wabash, Indiana and became mayor of the city. Dingledy also belongs to the Service Club of Indianapolis, open to anyone in any branch who served during wartime.  He cherishes one special item that is a frequent reminder of his war years. “I love my old wool army blanket that served me well during good times and bad in the Pacific, and still keeps me comfortable to this day,” he said. Dingledy also remains connected to his service as a member of the Americal Division Association, whose 2017 reunion was planned by Armed Forces Reunions in Bloomington MN. “Most of my generation is unfortunately gone now, but there’s a special bond regardless of when people served.”

The Pima Air & Space Museum opened its doors in May of 1976 and has grown to be one of the largest aviation museums in the world, and the largest non-government funded aviation museum in the United States.  Located in Tucson, Arizona, the museum maintains a collection of more than 335 aircraft and spacecraft from around the globe—including many rare and one-of-a-kind—and more than 125,000 artifacts.

Exhibits at the museum include some of the world’s greatest aviation heritage, including military, commercial and civil aviation. Among them are the SR-71 Blackbird—the world’s fastest plane, a B-29 Superfortress—the highest flying and fastest WWII bomber, a rare World War II German V-1 “buzz bomb” and a state of the art Boeing 787 Dreamliner. The museum sits on 80 acres and has six

The museum is also contracted by the United States Air Force to give tours of the 309th Aerospace Maintenance & Regeneration Group (AMARG)/Boneyard.  Here, visitors can see the United States military dry storage facility of thousands of aircraft. These tours are offered Monday-Friday (excluding federal holidays) and require an advance reservation by emailing boneyardtour@pimaair.org.