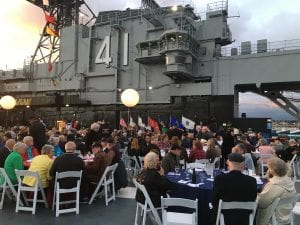 San Diego is a popular reunion destination, and AFR is busy there this month. I just returned from overseeing the Three Sisters Reunion at the Wyndham Bayside Hotel – a combined reunion for the USS Midway, USS FDR, and USS Coral Sea aircraft carriers. The banquet for 550 attendees was on-board the flight deck of the USS Midway (see photo), which is permanently moored on San Diego’s waterfront as a museum. The next week we hosted the Marine Corps Aviation Association’s Annual Symposium across the harbor at the Sheraton Marina. The symposium is the Marine Corps’ platform for awarding the annual squadron and individual awards. 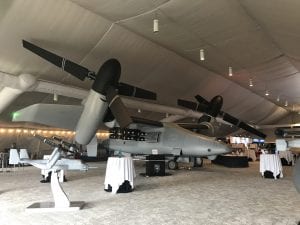 More than 900 active duty Marine airmen and women attended, with major exhibitors from Boeing and Lockheed Martin, to Bell and Rolls Royce. The centerpiece of the exhibit hall was Bell’s new, full-scale mock-up of its V-247 Vigilant unmanned tilt-rotor drone, developed using technology derived from the V-22 Osprey. This month we had U.S. Navy Reserve Returning Warrior Workshops in Puerto Rico, Seattle, and Norfolk. As with every year, we have dozens and dozens of reunion groups coast to coast. Feel free to call and TALK TO TED to help your group find the perfect reunion hotel.  800-562-7226

Our Featured Veteran this month is Mike Lamberto, Reunion Chairman for the Light Attack Squadron Four (VAL-4). We planned their 50th anniversary reunion in Pensacola this April. From 1969 to 1972 VAL-4 was responsible for more enemy casualties and saving more allies’ lives in Vietnam than all other naval squadrons combined during that period. Flying the OV-10 Bronco twin-turboprop (call sign Black Pony), the squadron provided close air support for ground forces primarily in the Mekong Delta.

The Top Destination this month is Portland, ME.  In Greater Portland you’ll experience the quintessential Maine coast along with a welcome mat for all veterans groups.  Portland is all about lighthouses and lobsters, Bath Iron Works and L.L. Bean.  And if you want to know what hotel in Portland has hosted hundreds of reunions shoot me an email with your group’s needs.

The Must-See Museum is the USS Kidd Veterans Museum, located in the heart of scenic downtown Baton Rouge, Louisiana. USS Kidd is the centerpiece of a memorial which serves to honor the men and women of our American armed forces. Walk the decks of the Kidd in person, as she is restored to her original WWII configuration. 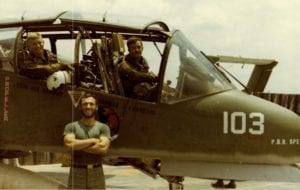 From 1969 to 1972 the Light Attack Squadron Four (VAL-4) was responsible for more enemy casualties and saving allies’ lives in Vietnam than all other naval squadrons combined during that period. Flying the OV-10 Bronco twin-turboprop (call sign Black Pony), the squadron provided close air support for ground forces primarily in the Mekong Delta. Based at Binh Thuy Air Base, LTJG Mike Lamberto got his wings in 1970 and by the fall of ‘71 had piloted 357 combat missions with VAL-4. Their priority was to have the backs of the Mobile Riverine Force (brown water Navy) of Navy SEALS, U.S. Army and South Vietnamese troops.  Armed with up to 16 extremely accurate 5” Zuni rockets, 2.75” rockets and four internally mounted M-60 machine guns, the OV-10 Bronco packed a punch.

“We usually arrived at the target area at 5,000 feet – weather permitting – and received a situation report from the ground commander,” Lamberto said. “We’d coordinate with the radiomen below and pinpoint the target to prosecute, making damn sure we were on the same page as it could often be a matter of yards between friendlies and foes. Viet Cong and the North Vietnamese Army were crafty and often dug deep in the mangroves and heavy vegetation in what was basically guerilla warfare, but our point-detonating Zunis could penetrate any bunker or fortification they had constructed. The Zuni was a difference-maker weapon and with our pinpoint accuracy and firepower we were the go-to quick response force unit in the Delta. We had the capability to turn a bad situation into a winnable engagement in a matter of minutes.”

The OV-10 Bronco was a maneuverable light attack and observation aircraft that could reach up to 190 knots when carrying a full load of its formidable ordinance. One of the unit’s most heralded combat support missions took place in Cambodia in 1971, where the communist NVA had a U.S. Marine advisor and about 200 South Vietnamese surrounded: “We were scrambled to Chheu Kachat at the tip of South Vietnam where our forces were trapped by overwhelming enemy numbers. It was a night operation and they were only about 30 yards away from our guys, so we had to be on the money. Ears to the radio and following the strobe light markers, pilots flew 18 close-in sorties with a barrage of Zunis. The Marine didn’t think they’d make it, but to everyone’s relief when dawn came the enemy was gone, with only their dead on the ground.” 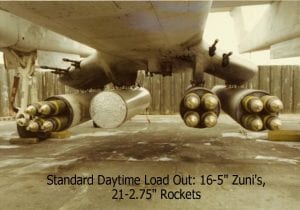 Lamberto left Vietnam as a lieutenant and spent two years at Roosevelt Roads Naval Station, Puerto Rico before going into the reserves and being assigned to Naval Air Station Glenview in Illinois, then to Commander in Chief Pacific Headquarters in Hawaii. He retired from the Navy in 1994 as a Commander and the recipient of the Distinguished Flying Cross for his role in in piloting the lead plane against an overrun of a South Vietnamese Army base: “Friendly casualties were a concern because if the shooter, me, was not on target there could be serious consequences, but the run was right on and our Zuni’s destroyed the bunkers and VC and NVA holed up there. Afterwards we were directed to hit more enemy troops to the east and then had to return to Binh Thuy to reload and finish the job. The base was saved along with many lives.” Lamberto also received 34 Strike/Flight Air Medals, four Individual Air Medals, three Navy Commendation (V) Medals and the Combat Action Ribbon.

His civilian career included working for IBM in Tucson, Arizona in the 1970s and for 30 years as a managing partner for Copycat Photography Centers in Des Moines, Iowa. Today he is the owner of Lambro Enterprises, LLC – a manufacturing firm in Grenville, SD, where he and his wife Pam live in the summer and Colorado Springs during winter.

While Lamberto has occasionally met with fellow vets over the years, the Black Ponies formally reunited at their 50th reunion in April in Pensacola, Florida, managed by Armed Forces Reunions, Inc.  “We hadn’t officially gathered in about a decade, so Pensacola was special,” said Lamberto, 73. “Out of 140 original pilots we had about 60 officers and 40 enlisted men, along with families and friends. Some have passed away, others prefer not to travel, but everyone had a great time catching up and sharing war stories that always get bigger and better. There also was a very touching tribute to us from the son of Colonel Ben Bender, who was a Marine captain trapped at Chheu Kachat.” Said Mick Bender: “Our family and others cannot begin to thank the Black Ponies enough for their heroic service and bravery. From a personal standpoint, I wouldn’t have had a sister if dad hadn’t returned home.” 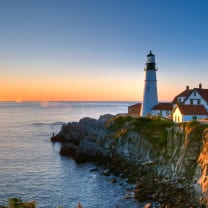 Visit Bath, home to the Maine Maritime Museum, devoted to the state’s rich maritime history. Take a guided cruise past Bath Iron Works, seeing both the shipyard and the DDG-1000 Zumwalt tied up at the dock. From watercraft and lobstering, to shipbuilding and sea trade, you’ll hear stories about dangerous voyages to distant lands, see how a shipbuilder’s family lived in the 1890s, smell the sawdust from historic ship timbers, and discover the wonders and mysteries of Maine’s maritime culture. Bath is also the only active Shaker community in the world and welcomes visitors to its New Gloucester farm.  Visit Freeport, a city full of wonderful outlet stores, delicious local seafood, and LL Bean’s flagship store – a “must see” while in Maine! 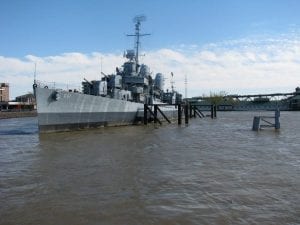 Located in the heart of scenic downtown Baton Rouge, Louisiana, USS Kidd is the centerpiece of a memorial which serves to honor the men and women of our American armed forces. Take a step back in time with knowledgeable docents and walk the decks of the Kidd in person, as she is restored to her original WWII configuration. See the aircraft that soared through the skies of Southeast Asia during two eras of conflict. Examine the dented helmet of an infantryman who stormed the beaches of Normandy. Touch the names of the fallen Americans whose names are carved into the black granite walls of the Louisiana Memorial Plaza.

One of the most common misconceptions regarding USS KIDD (DD-661) is that of her namesake. She was named after Rear Admiral Isaac Campbell Kidd, Sr., who was killed aboard USS ARIZONA at Pearl Harbor during the Japanese attack on December 7, 1941. But when KIDD’s first crew was busy outfitting the ship in the Brooklyn Navy Shipyards in March and April of 1943, they quickly adopted the legendary pirate William Kidd as their mascot. The image of a swashbuckling pirate was painted on both sides of the ship’s forward smokestack and the skull and crossbones of the Jolly Roger often flew from her mast. Throughout the course of World War II, the Korean War, and the Cold War, the crews of USS KIDD became known as “the Pirates of the Pacific”. Many a sea story revolve around the antics that transpired which led to that salty and rambunctious reputation.