Armed Forces Reunions has been booking reunions nationwide for going on thirty years – and WE KNOW where the truly reunion-friendly hotels are. It’s amazing that we’ve been working with many of the same hotels since the late 1980s, and in a couple cases even with the same salespeople! We’ve seen hotels grant all our wishes one year, and turn around the next under new management with policies not friendly to reunions at all.  New GMs are beholden to ownership and think they can change policies and create new revenue.  Often the changes have to do with hospitality room policy and allowing groups to provide their own refreshments.

Management turnover often results in scaring reunion business away – but they usually come to learn their mistakes.  We often find ourselves training new management and new sales staffs on hot buttons in the military reunion market.  The hospitality industry has one of the highest turnover ratios of any industry.  Since we’ve been around so long it’s easy for us to point to multiple past bookings with the hotel or hotels in that city.  We point out that reunion groups are consistent from year to year, fill hotel rooms on weekends (soft days in most cities), will adjust arrival/departure patterns to create a win/win for all parties, and above all that reunion attendees are respectful citizens that any hotel should love to have in-house.

AFR brings stability and continuity to its clients, as we are from year to year on top of which hotels are truly reunion-friendly.  We get the best room rates in the business and concessions that most groups cannot get on their own.  AFR is the ROCK of the military reunion industry – a known leader with the highest of ethical standards.  Get a Professional On Your Side!

For help finding a reunion-friendly hotel please feel free to CONTACT US any time.

The Featured Veteran this month is Bobby Jack Woolley, who flew the Cessna OV-1 Bird Dog in Vietnam. Says Bobby Jack: “We were the airborne eyes and ears and had a multitude of missions; visual reconnaissance and surveillance, aerial fire and forward control, artillery and naval gun fire adjustment and ground support.”  We look forward to being with the Bird Dog vets in DC this coming August.

The Featured Reunion Destination this month is Bloomington, MN – home to the unrivaled Mall of America. Bloomington’s Convention Bureau has long rolled out the red carpet for military reunion groups and the hotels know what it takes to be reunion-friendly.  With gleaming Minneapolis and stately St. Paul nearby there is plenty to do tour-wise.  Room rates are reasonable in Bloomington, the local airport is located there, and all the hotels offer free shuttle to the airport and the Mall.  If you want a reunion-friendly hotel there please Contact Us.

The Must-See Museum this month is the National Museum of the Mighty Eighth Air Force, which features over 90,000 square feet of exhibits, interactive displays, historical artifacts and a magnificent collection of aviation art.  AFR has planned reunions for the 8th Air Force Historical Society for decades and we’ve visited this splendid museum many times over the years.  We look forward to the 8AFHS’s September reunion in New Orleans. 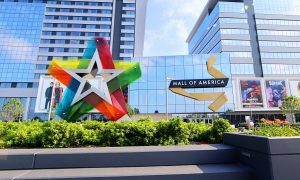 Bloomington is the city that sits at the doorstep of the busy Minneapolis/Saint Paul International Airport and is home to the world’s premiere retail and entertainment complex, Mall of America®.

In Bloomington, you will find every amenity a military group needs to plan the perfect reunion – competitive room rates and complimentary hospitality rooms, along with FREE parking and shuttles. Our hotels are military reunion friendly, offering comprehensive amenities, impeccable service, and reasonable room rates.

As Home of Mall of America, Bloomington hosts more than 42 million travelers from near and far, who are making their shopping pilgrimage to the world’s foremost indoor shopping and entertainment attraction. In addition to the mall’s 520 retail shops, visitors can have an outstanding meal at one of the over 50 restaurants and countless attractions including Nickelodeon Universe®, SEA LIFE® Minnesota Aquarium, and FlyOver America.  Plus, shopping without tax on clothing and shoes makes the Mall of America experience even more enjoyable – all under one roof.  The convenient Blue Line Light Rail will whisk visitors to downtown Minneapolis and the brand new Green Line will do the same to Saint Paul.  Hop on the Light Rail easily at Mall of America.

The city offers over 40 economy to luxury hotels and 9,300 hotel rooms, which is more than Minneapolis and Saint Paul combined, and impeccable service to all guests.  That’s why Bloomington is commonly referred to as the hospitality capital of Minnesota.  Hotels provide complimentary shuttle service to and from the airport and Mall of America, and there’s free parking throughout the city.

A forward observer on his first tour in Vietnam, U.S. Army Lt. Bobby Jack Woolley was in the middle of bloody and protracted fighting at Dak To in 1967 as the North Vietnamese Army assaulted a vital communications center. “The enemy was very resistant and hit back hard with small arms, mortars and ambushes behind every other corner of the jungle”, Woolley said. “The availability of the O-1 Bird Dog over the area was a significant asset to the ground commanders.”

Woolley went back to the states to attend flight school and returned in ’68 to the same region he’d served on the ground, but this time as a pilot with the 203rd RAC, a Bird Dog unit. “We were the airborne eyes and ears and had a multitude of missions; visual reconnaissance and surveillance, aerial fire and forward control, artillery and naval gun fire adjustment and ground support just for starters,” he said.

The Cessna O-1 Bird Dog was used in Vietnam by the Army, Marines, Air Force and allies.  It was a two-passenger aircraft and aptly named with excellent cockpit visibility, high maneuverability, light and quiet; invaluable for finding the enemy and reporting their position for air, artillery or ground assault. The aircraft often carried high explosive rockets and some units mounted M-60 machine guns. Called the “soldier’s best friend” as the enemy was often reluctant to shoot for fear of giving away their location.

“It was the least sophisticated, but a very capable observation aircraft that play an understated role, but a significant one waging combat in Vietnam,” said Woolley.  “We lost nearly 470 aircraft in Vietnam, and only the F-4 Phantom losses were greater.”

Woolley obtained over 1000 hours of combat flight time.  After his second tour he left Southeast Asia in mid-1968 to become a Bird Dog and Mohawk flight instructor at Fort Rucker. He served 22 years before retiring from the Army as a lieutenant colonel in 1987 and then flew for Federal Express, again retiring in 1995.

Woolley, however, was not finished with his beloved Bird Dog and began work on a book, The Bird Dogs’ Tale, published in 2011 and available on Amazon.com. 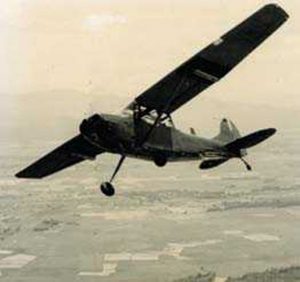 “I wanted to present a complete depiction and appreciation of the plane’s versatile role from 1962 to ’72. “It’s dedicated to the 250+ individuals who made the ultimate sacrifice and to provide a written record for their families.  The book gives a complete understanding of what the whole Bird Dog business was about; its crews, support personnel, missions and its overall contribution in Vietnam”, said Woolley.

Woolley also remains connected to the plane through his attendance at the reunions of the current Bird Dog units, including the first in 2003 at Fort Rucker and the Bird Dog Memorial dedication at that site in 2015. He is involved in the planning for the upcoming All Bird Dog Units Reunion in Washington, D.C. in August, which for the first time will include members of all military branches that flew the plane. The reunion is being managed by Armed Forces Reunions, Inc., the parent company of BookMyReunion.com.

“A gathering of representatives of all of the Vietnam Era Bird Dog units will provide a very special occasion and the means to remember when, where, how and why we were a part of the Cessna 0-1 operations,” Woolley said. “With vets from the USA, USAF, USMC and allies, this will be a time for all of us to look back at what was accomplished, share with those who are still here and honor those we lost.”

Located only minutes from Downtown Savannah, where the Eighth Air Force was activated in 1942, the Museum features over 90,000 square feet of exhibits, interactive displays, historical artifacts and a magnificent collection of aviation art. See a visually realistic mission experience, a world renowned research Center and beautiful Memorial Garden. The World War II B-17 Flying Fortress, “City of Savannah,” is undergoing a complete restoration inside the Museum’s Combat Gallery. Come be a part of history in the making!

Air combat was deadly but intermittent: periods of inactivity and anxiety were followed by short bursts of fire and fear. Unlike infantrymen, bomber boys slept on clean sheets, drank beer in local pubs, and danced to the swing music of Glenn Miller’s Air Force band, which toured U.S. air bases in England. But they had a much greater chance of dying than ground soldiers. In 1943, an American bomber crewman stood only a one-in-five chance of surviving his tour of duty, twenty-five missions. The Eighth Air Force lost more men in the war than the U.S. Marine Corps.

The Masters of the Air exhibit is the deeply personal story of the American bomber boys in World War II who brought the war to Hitler’s doorstep. With the narrative power of fiction, Donald Miller takes readers on a harrowing ride through the fire-filled skies over Berlin, Hanover, and Dresden and describes the terrible cost of bombing for the German people. Fighting at 25,000 feet in thin, freezing air that no warriors had ever encountered before, bomber crews battled new kinds of assaults on body and mind.

The Hall of Valor exhibit honors a number of outstanding individuals who served with the Eighth Air Force during World War II. Included are the aces, the Commanders of the Eighth Air Force, and those awarded the Medal of Honor. These men paved the way to an end to the war.  To learn more about the museum visit their website.