Fixed wing Army Aviation took a great leap forward during the Vietnam War. As documented by the U.S. Army Transportation Museum at Fort Eustis (Newport News, VA), “one of the most overlooked and under-reported aspects of Army aviation is the fixed wing element. Army airplanes were barred from carrying weapons and restricted in size and weight by agreement with the Air Force. Army aircraft were small and able to use landing strips that were unusable by larger aircraft flown by the Air Force. They were also less maintenance intensive than helicopters. Army airplanes performed intelligence, signal, liaison, scouting, and cargo missions. In supply missions, the airplanes provided a vital link to the remote outposts that were unable to be realistically supplied any other way.”

The largest of the Army planes, the CV-2 Caribou, routinely landed on short, unimproved landing strips. The Otter and the Caribou were deployed in 1962, three years prior to the use of U.S. ground forces. “The mission in those early years was to support our Special Forces and training advisors scattered throughout the Republic of South Vietnam. The aircraft often provided the sole source of contact, supplies and mail for these brave Green Berets.”

In the dense jungles of Vietnam tactical aerial reconnaissance proved vital, and was performed with 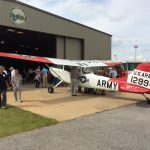 photographic, infrared, and side-looking airborne radar sensors mounted on Mohawk OV-1 aircraft. The Cessna O-1 Bird Dog was chosen “to find the enemy and orbit overhead until artillery (or attack aircraft) could be brought to bear on the enemy. While flying low and close to the battlefield, the pilot would observe the exploding shells and adjust the fire via his radios.”

AFR is proud to serve the veterans who flew these aircraft. This year in Washington DC we are planning reunions for the OV-1 Mohawk Association and the 18th/54th Aviation Co. Otternest Assn. In fact, we arranged for a joint gathering at one of our reunion-friendly hotels, which will prove interesting to both groups. In 2015 we planned the first ever All Bird Dog Unit reunion in Dothan, AL (home to the U.S. Army Aviation Museum) and will host the Bird Dog vets in D.C. in 2017. We planned the U.S. Army Otter Caribou Association’s 2015 reunion in Dayton and they’ll have their 2016 reunion in historic Savannah, home to the Mighty Eighth Air Force Museum.

Mohawker and OV-1’s Reunion Director John Bosch is our Featured Veteran this month. Virginia Beach is our Featured Top Reunion Destination. If your group is interested in visiting the U.S. Army Transportation Museum or the Military Aviation Museum this oceanside resort town is a great place to settle in with a reunion-friendly hotel.

No matter what branch you served in, if you want a 5-star reunion email us or call 800-562-7226! Our hotel partners give our groups the best deal on the books, guaranteed.

Virginia Beach is a dramatic and meaningful setting for military reunions. This coastal resort is centrally located on the East Coast and within a day’s drive of two-thirds of America’s population. Three military bases are located in Virginia Beach: Naval Air Station Oceana, Fleet Training Center Dam Neck, and Joint-Expeditionary Base Little Creek-Fort Story. The greater Virginia Beach metropolitan area is home to nine additional major military installations representing all the branches of the U.S. Armed Forces, including the world’s largest naval base and home of the Atlantic Fleet. The local military installations provide jobs for more than 33,000 service members and civilians, with a combined annual payroll of more than $7.5 billion. Seven of the world’s top defense-related firms have a major presence in Virginia Beach, supporting the largest active duty military population in the U.S.

In Virginia Beach, we pride ourselves in offering the very best customer service to these modern day heroes. At no cost to your organization, our full-time reunion coordinator will give you all the assistance you need to plan a successful military reunion including:

• Helping you find the perfect hotel and hospitality room
• Recommending attractions that will interest and excite your delegate base
• Providing lists and contacts for off-property venues, tours, and entertainment options
• Support amenities such as welcome desk kits, destination materials, and JROTC Honor Guard services
• Site visit coordination, attendance building tools, and on-site meeting assistance
• Suite Salute incentive program offering a marketing sponsorship to groups based on the meeting’s time of year and total room nights that adds $’s to programming

Once here, key attractions include: tours of master jet base Naval Air Station Oceana, the Military

As a year-round meeting destination and Virginia’s most populous city, it’s no wonder Virginia Beach offers every kind of accommodation imaginable – from first class hotels in resort, suburban, or retreat settings to cottages, condos, and campgrounds. Whatever your group needs, you’re sure to find it in Virginia Beach with over 11,000 guestrooms.

Allow your new friends at the Virginia Beach Convention & Visitors Bureau help provide you the perfect setting to reconnect with your old friends!

Equipped with some of the most sophisticated aerial surveillance technology of the time, U.S. Army Technical Observer Specialist John Bosch’s job was to locate enemy positions and report to American forces on the ground. In the right seat of the OV-1, a two-seated, fixed-wing, twin turbo prop, Bosch was the pilot’s eyes and ears, scouring the jungles of Vietnam, Cambodia and near the border of Laos in 1970-’71.

“The OV-1 Mohawk was a very early predecessor of drones. We flew at night, alone and loaded with the newest photographic technology, including infrared and SLAR, or side-looking airborne radar sensors,” Bosch said. “We were outfitted with a screen and film-development capabilities to plot coordinates and provide crucial information that could be brought to bear on the Viet Cong and North Vietnamese in a hurry. Many of the Mohawk’s missions helped generate intelligence and data for B-52 strikes, critical in conducting the war. An OV-1 stands in the Army Intelligence Memorial Park at Ft. Huachuca, Arizona.”

Due to an agreement with the U.S. Air Force, fixed wing aircraft were barred early in the war from

carrying weapons. Their objective was target acquisition. Relatively light and highly maneuverable, the aircraft could operate from short, unimproved and often remote runways. Missions were clandestine, classified and intelligence gathered a secret. Mohawks played a significant role during the Lam Son 719 Campaign in Laos, where more than 1,300 B-52 bombing strikes were conducted. Bosch was among the only air crews in Army history where enlisted airmen flew in the critical right seat of the Mohawk.

“It was a real honor to fly with the best pilots the Army had,” said Bosch, 68. “Our orders were not to engage and take evasive action. Many missions were routine, others were white-knuckle moments. On one flight we were tracking a particularly important target, so we didn’t take evasive action, flew low and became quite vulnerable. We took some incoming rounds, mostly small arms, but were lucky, relayed the enemy location and got out of there. I was trained to fly the Mohawk in case the pilot was injured, but that was primarily for the purpose of returning safely to a friendly air field, or in more dire situations, to eject him and then myself. Fortunately that didn’t happen.”

Bosch racked up about 500 hours of airtime in the OV-1 and received a Vietnam Service Medal, Good Conduct Medal and several air medals. “It was just a wonderful aircraft. I was mostly in the B and C models, which were powerful and very performance capable. They had three pieces of tail that gave it tremendous maneuverability. But it was the surveillance technology and tremendous visibility that supported the primary objective. Adding to all the instrumentation was the sight advantage of being surrounded by an open canopy, almost to leg level,” he said.

Bosch returned to the states after Vietnam and resumed his career in the construction industry, working for Solomon Colors, Inc. in Springfield, Illinois before retiring. He remains affiliated with the Mohawk as the Reunion Director of the OV-1 Mohawk Association, which has about 1,400 veterans from Vietnam to Desert Storm. Their next gathering is set for September 22 – 25 in Washington, D.C. followed by Colorado Springs in 2017. The association’s reunions are managed by Armed Forces Reunions, Inc. “One of our members likens our events to a traveling barn dance, all about the guys getting together to tell stories that get bigger every year, a great time of fellowship,” Bosch said.

Living with wife Cecilia in Laguna Hills, California, Bosch also stays connected to the plane as a member and docent at the Planes of Fame Air Museum in Chino, CA. An OV-1 static is on display, but the museum is working to get the real thing later this year.

“I’m really hoping to get back in the cockpit, airborne and enjoy some peacetime landscapes,” Bosch said.