The Dog Days of Summer! There are not many groups braving the summer heat this year. In Colorado Springs we have the 981st MP CO and in Pittsburgh we have one of our U.S. Navy Reserve Returning Warrior Workshops. The government contracted AFR to plan these Yellow Ribbon Events in CONUS, Puerto Rico. Hawaii, and Alaska. The high season for reunions will kick in next month and peak in September and October. No matter what size your group is, allow AFR to gain proposals for future consideration. Having planned reunions in over 150 cities for over thirty years we will guide you to reunion-friendly hotels with the best rates. Consider AFR your national Reunion Bureau. We will take the guesswork out and help get proposals from hotels that really want reunion business, and which prove it year in and year out. Pick up the phone and TALK TO TED at 1–800-562-7226 or email me at ted@afri.com.

For this month’s Featured Veteran we are paying tribute to one of our nation’s greatest heroes – Lt. Gen. Lawrence F. Snowden USMC, who passed away February 18, 2018. Gen. Snowden was one of our first interviewees in early 2015, and was a great supporter of AFR. We are currently planning the 75th anniversary reunion for the surviving members of the Battle of Iwo Jima to be held in Washington DC over the dates of February 26 to March 1. Gen Snowden will be sorely missed but remains in all our hearts to this day.

The Top Destination this month is Louisville, KY, known around the world for horse racing, one-of-a-kind southern hospitality, and the Kentucky Bourbon Trail. Visit Churchill Downs, home of the Kentucky Derby, and the Louisville Slugger Museum, featuring rare baseball equipment and memorabilia. Take a driving tour of Ft. Knox and visit the General George S. Patton Museum and Center of Leadership.

The Must-See Museum is the NRA National Firearms Museum in Fairfax, Virginia – with fifteen galleries that examine the nearly 700-year history of firearms with a special emphasis on the American experience: 85 exhibit cases housing 3,000 firearms in a 15,000 sq. foot facility. 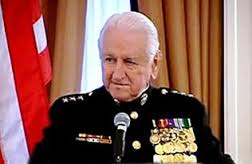 Immortalized in Joe Rosenthal’s photo of five U.S. Marines and a Navy hospital corpsman hoisting the American Flag on Mount Suribachi, the battle for Iwo Jima remains one of the most iconic and bloody fights of World War II. February 19, 2020 marks the 75th anniversary of the start of the five-week struggle. Lt. Gen. Lawrence F. Snowden USMC (Ret.), who passed away on February 18, 2018, was a 23-year-old Captain and commander of Company F, 2nd Battalion, 23rd Marine Regiment, 4th Marine Division. He was among the first waves of Marines going in and today is the most senior ranking survivor.

“The fighting was fierce and there was tremendous carnage on both sides, but it was for a very important strategic need,” said Snowden, 93, who lived in Tallahassee, FL. “Iwo provided the proximity for our new B-29 bombers to reach mainland Japan. It also became crucial for emergency landings of 2,400 of the planes. Of key importance was that it marked the first capture of Japanese homeland and the psychological impact on them was tremendous.”

Iwo Jima was the largest Marine amphibious operation of the war, and the costs of victory were extremely high. With nearly 27,000 Marine and 23,000 Japanese casualties, it was the only battle of the war where the Marines suffered more losses than the Japanese. The struggle was described as “being something out of Dante’s Inferno” in Hyper War: Closing In: Marines in the Seizure of Iwo Jima by Col. Joseph H. Alexander, USMC (Ret.).

In 1950 Snowden helped create the Marine Corps Development Center in Quantico, which charted 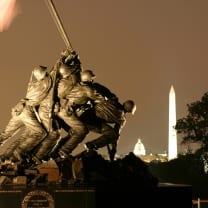 operations and concept development for the future. He served as a Major and Battalion Executive in the Korean War, and in Vietnam he commanded the 7th Marine Regiment. “We did a lot of anti-Viet Cong missions, chasing guys who were farmers in the daytime and Viet Cong at night” Snowden said. “It was pretty horrific; we lost a lot of arms and legs because of their trip wires. Now we call them IEDs.”

Snowden received five Legion of Merit awards over his thirty-seven years of service, two for combat. He was Chief of Staff of U.S. Forces in Japan from the early to mid-1970s. He was promoted to Lieutenant General on 1 September 1975 when he assumed the billet as the Marine Corps Operational Deputy to the Joint Chiefs of Staff. He received a second Distinguished Service Medal for his service as Chief of Staff and retired in 1979.

“I changed my mind in Korea about who our enemies were,” he said. Forty years after the battle, Snowden and other veterans of the struggle decided to visit the island. On the 50th anniversary in 1995 he and the group officially established The Reunion of Honor. “We didn’t and don’t go to Iwo Jima to celebrate victory, but for the solemn purpose to pay tribute to and honor those who lost their lives on both sides,” Snowden said. “It is a real alliance between the two countries. What I hope is that everyone understands that enemies can become friends, and that there is no more important bilateral relationship than between the U.S. and Japan.”

Armed Forces Reunions is planning the 75th anniversary reunion in DC for 2020. The remaining veterans along with friends and dignitaries will dearly miss Gen. Snowden but he will be in the thoughts and prayers of all who attend. He was one our nation’s greatest heroes, and a dignified and humble man. The reunion will feature a wide range of activities and speakers, including U.S. government officials and the Ambassador of Japan. 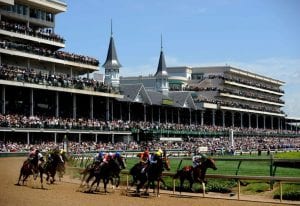 People come from around the world to experience Louisville’s one-of-a-kind southern hospitality – from boundary-pushing twists on Southern cuisine to its one and only Urban Bourbon Experience, featuring the world’s only, city-wide trail filled with award-winning micro-distilleries, exhibits and craft cocktail destinations. Bourbon is more than a drink in Kentucky. Don’t miss the Bulleit Frontier Whiskey Experience on the impressive Kentucky Bourbon Trail, and right in downtown Louisville you’ll find the Evan Williams Experience on Whiskey Row.

Visit Churchill Downs, home of the Kentucky Derby, and enjoy a 360-degree multi-media show that surrounds you with the images and sounds unique to Derby Day – “the most exciting two minutes in sports.”  Then head to the Louisville Slugger Museum, another famous landmark featuring rare baseball equipment and memorabilia. Take a driving tour of Ft. Knox, originally created in 1918 during WWI.  In 1932 the 1st Cavalry Regiment, the Army’s oldest mounted unit, arrived at Fort Knox and exchanged its horses for armored combat cars. Visit the General George S. Patton Museum and Center of Leadership. Exhibits depict the history of Fort Knox, where the Armored Force was formed in 1940, and the development of cavalry and armored weapons, equipment, and uniforms from the Revolutionary War to the present.  The Patton Gallery contains many of the General’s personal items, including his famous ivory-handled pistols.

The NRA National Firearms Museum in Fairfax, Virginia consists of 15 galleries comprised with 85 exhibit cases housing 3,000 firearms in a 15,000 square foot facility. The Museum examines the nearly 700-year history of firearms with a special emphasis on the American experience.  Each gallery is evocative of a period of time in American history, from the stockade fort at Jamestown to the gun factories of New England.  Life-sized dioramas include a nineteenth-century riflemaker’s shop, a trench on the Western Front in WWI, and a shelled-out town square in Normandy in WWII.  The firearms tell the stories of how they were used to provide security and sustenance to the early colonists, how they were used to secure our freedom and independence, and have been used ever since to maintain and preserve those liberties. “The Robert E. Petersen Gallery” has been called “the finest single room of guns anywhere in the world.”

It features masterpieces of firearms engraving, exquisite British double rifles and shotguns, and the largest collection of Gatling guns on public display.” The “Hollywood Guns” display features 120 actual guns used in movies and television over the past 80 years, from the first revolver John Wayne used on camera through guns from recent Academy Award Winners such as “Hurt Locker.”  Other favorites in the exhibit include the Beretta pistol used both by Mel Gibson in “Lethal Weapon” and by Bruce Willis in “Die Hard,” and the .44 Magnum Smith & Wesson carried by Clint Eastwood in “Dirty Harry.” Special arrangements can be made to have a live fire demo with different types of guns, with one lucky winner firing off a Thompson submachine gun.