We’re deep into the reunion season, and AFR planners are on the go overseeing reunions coast to coast.  This week we’re with the USS Little Rock Association in Providence – the 25th annual reunion we’ve planned for them!  3/3 RVN Battalion’s biennial reunion gears up in San Diego, where AFR books at least five reunions every year.  When considering your group’s next reunion AFR would be happy to guide you to a reunion-friendly city and hotel.  AND your group can earn $100 to $1,750 just for trying us out!  See our promo link below.

For reunions under 50 rooms per night you can get your group attrition-free hotel contracts by visiting www.bookmyreunion.com.  Having booked reunions nationwide in over 150 cities we know what hotels are reunion-friendly and offer great rates and hospitality rooms.

The Featured Veteran this month is Col. Robert Dudley USA (Ret.), who represents the Society of the Fifth Division.  Their reunion will be this September if Pittsburgh, and Bob, a volunteer docent at the National WWI Museum and Memorial, will host next year’s reunion in Kansas City.  AFR has a long history of partnership with Infantry Division reunions.  Thanks to legacy chapter involvement we still plan reunions for the 87th, 94th, 104th, and 106th Infantry Division Associations.  Next year we welcome first-timer AFR clients 2nd Indianhead Division Association and the 11th ACR Blackhorse Association.  The 2nd Division will be celebrating the 100th Anniversary of the division’s founding – with a special ceremony at the 2ID Memorial that fronts the White House.  Blackhorse vets will be visiting their memorial at the National Infantry Museum in Columbus, GA.  Both groups are taking advantage of AFR’s first-timer promo.  Once a group samples the services offered by AFR they’ll be loyal AFR clients forever more.

This month’s Top Reunion Destination is Jacksonville, FL.  What a reunion-friendly city!  In a couple weeks we’ll oversee the biennial reunion for the USMC Helicopter and Tiltrotor Association at the Hyatt in JAX – with over 700 in attendance!  Jacksonville is one of those cities that any reunion group, from any service, will find attractive – and REUNION-FRIENDLY!

DESTINATION OF THE MONTH: JACKSONVILLE, FL 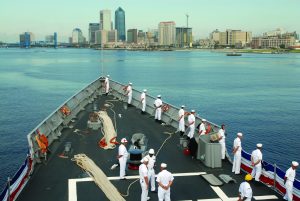 Nestled between the beautiful Atlantic Ocean and the sparkling St. Johns River, the “River City by the Sea” is the perfect destination for military families and groups looking to honor our nation’s heroes and enjoy a great time. Home to a longstanding military presence, Jacksonville has two navy bases, armed forces monuments, historic sites, thousands of active-duty military personnel, plus a vibrant arts and culture scene, an extensive park system, pristine beaches, delicious authentic cuisine, fun attractions, and great Southern hospitality waiting to entertain visitors from across the globe.

Naval Air Station Jacksonville is the birthplace of the famed Blue Angels. And at the beaches, Naval Station Mayport welcomes ships from all over the world. The annual Jacksonville Air Show alternates between the sandy shores of Jacksonville Beach and the impressive force of NAS JAX every October. Another annual event where our military heritage is celebrated and elevated is the Jacksonville Veteran’s Day Parade. Held in Downtown, it is the largest military parade in the state of Florida.

Visiting groups and Navy buffs can tour our military attractions, cruise down the St. Johns River on a dinner cruise boat, explore the outdoors with guided fishing charters, hit the greens in one Jacksonville’s many golf courses, enjoy military appreciation day at THE PLAYERS Championship, cheer on the Jacksonville Jaguars, learn to surf or paddleboard in our 22 miles of beaches, kayak hundreds of miles of wetlands and marshes, enjoy a night at the Symphony, visit the Jacksonville Maritime Heritage Center, and indulge in Jacksonville’s diverse dining and nightlife scene.

“Only in Jax” Military Sites

Warrior to Strategist to Fighting Terrorism

Sent to Vietnam in 1970 after being commissioned in the Field Artillery, U.S. Army Second Lieutenant Robert M. Dudley first served as a forward observer, providing artillery support to his maneuver unit. He was reassigned as the fire direction officer for South Vietnamese and U.S. troops near Khe Sanh and in Laos during Operation Lam Son 719. Ultimately he became the battery executive officer in 1971, serving as the second in command of six 155 mm howitzers supporting troops along the Demilitarized Zone. “Field artillery can be compared to a boxer,” Dudley said. “The forward observer is the eyes, the fire direction center the brains, and the guns the fists.”

He had some close calls: “On March 25 we were under constant artillery, rocket and mortar assault from a cave in Laotian cliffs. I thought this was my last day and I wanted to take out as many of those SOBs as I could. We counter-fired for nearly twelve hours, and had to resupply our ammunition with a jeep and trailer. I’d time it, and when I heard them fire, I’d jump into a ditch. Once the shells hit, I’d get back in the jeep and continue resupplying. We were lucky to make it out.”

Several years after Vietnam, Dudley earned a Master of Science in Management from the Naval Postgraduate School in Monterey, California and began a long career with many assignments stateside and abroad. He commanded as a captain, lieutenant colonel and colonel, serving on staffs from battalion through Army levels, including battalion executive officer and Chief Officer Management at Fort Sill in the early 1980s and in Germany as a brigade S3 and commander of the 3rd Battalion 35th Field Artillery. Dudley returned stateside teaching tactics at the Command and General Staff College before attending the Armed Forces Staff College and the U.S. Army War College Fellowship at the School of Advanced Military Studies. “I guess you could describe me as a combat warrior who became an academic military strategist,” said Dudley, 69, who lives with wife Patricia in Bonner Springs, outside Kansas City.

Retiring in 1997 after more than 29 years, Dudley worked at Sprint, but soon began to serve his country from the private sector, helping fight the war against terrorism as Terrorism Task Leader at Fort Leavenworth for MPRI, a defense contracting company. In 2002 he headed research, writing and editing of the first two versions of A Military Guide to Terrorism in the Twenty-First Century and provided anti-terrorism training for National Guard units deploying to Kosovo.  He also helped train law enforcement professionals going to Iraq and Afghanistan. Today he is a part-time consultant with Engility Corporation and regularly travels to Germany to provide military analysis during multinational training exercises. “My work in the private sector is helped tremendously by the real-world experience and technical skills I developed in my military career,” he said.

Dudley is a member of many military-related organizations, including the Society of the Fifth Division. In September he’ll become President of the Society, whose reunions are managed by Armed Forces Reunions, Inc. the parent company of BookMyReunion.com. Their gathering in 2017 will be in Kansas City, home to the National WWI Museum and Memorial where Dudley volunteers.

“With the museum here, and the centennial of both the country’s entry into WWI and activation of the 5th Infantry Division, it will be a very special time,” Dudley said. “We have a deep tradition and I look forward to serving the brave men and women of Fifth. I’ll also enjoy sharing some stories from the ring with the old boxers.”