Armed Forces Reunions has been a trusted partner to reunion groups for 30 years.  If your group is seeking a reunion-friendly hotel please visit www.bookmyreunion.com for great ideas.  If you are seeking full-service reunion planning please visit www.afri.com to learn more about our unsurpassed services.  If your group is late to the game, and is seeking a destination for 2018 please call me (Ted Dey) any time at 1-800-562-7226, and I’ll be happy to discuss options available for your group.  Have a great 2018!

The Top Destination this month is Dupage County – home of the First Division Museum at Cantigny Park. Many reunion groups going to the Chicago area book hotels in Dupage County; AFR will gladly lend you a hand.  Our Featured Veteran this month is Dr. Stan Allen, a medic with the 182nd Regiment of the Americal Division during WWII in Bougainville.  AFR plans the annual reunions for the Americal Division.  The Must-See Museum is the United States Air Force Museum at Wright-Patterson Air Force Base in Dayton, the oldest and largest military aviation museum in the world. 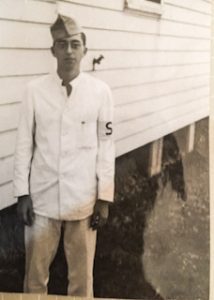 With the 31st Portable Surgical Hospital of the 182nd regiment of the Americal Division, U.S. Army Technician Fifth Grade Stan Allen soon would have his work cut out for him in one of World War II’s bloodiest theaters. About 10 months after the battle of Guadalcanal the Marines in late 1943 had established a beachhead on Bougainville, the largest of the Solomon Islands. Their position was reinforced by the Army prior to the arrival of Allen’s unit in early ’44. The next two years would serve as a launch pad for his future.

“Our outfit consisted of only 33 men, four medical officers, three surgeons and an anesthesiologist, which made us mobile and attached wherever we were needed,” said Dr. Allen, 94 and retired. “There was never any intention to take all of Bougainville, just to establish a secure perimeter to build air fields. Although technicians, we were also considered combat medics because we carried carbines, came under direct fire and worked near the fight lines.”

Allen served in the receiving tent to assist in triage, preparation for surgery, shock therapy treatment and other injuries at the second battle of Bougainville. Intelligence confirmed an enemy offensive was coming and the unit hurried to establish a fixed base near the front.  “We came under 90 mm mortar fire on March 9th, about 600 yards from hand-to-hand combat on Hill 260. In two weeks of fighting we received about 62 patients, operated on 53 of them, with the remainder having mortal injuries. The death rate of those operated on was about 15 percent, near the same level for the approximately 400 casualties in our troops. At one point we worked 48 hours straight, but we were able to save lives and keep the Japanese from advancing. We suffered no casualties in our unit, but unfortunately many guys from the front were not so lucky.”

Allen and outfit remained for about six weeks after the battle, patrolling the mountains and beaches. Late in ’44 he was transferred to the medical facilities on Emirau Island where he served as night ward master, helping soldiers cope with equatorial jungle heat, fever, rashes, dehydration and kidney stones. After developing a digestive illness unresponsive to treatment, Allen was evacuated to the U.S., receiving a disability discharge in July of 1945.  “I did nothing heroic in WWII, but we did help soldiers survive and that’s something you can never forget.”

After the war Allen came home to Watertown, South Dakota and in 1952 earned an MD from Northwestern University, returning to serve his rural community for 35 years as a general practitioner. During the early ‘90s and this past fall he took trips to refresh memories from his wartime past and roots of his career, attending reunions of the Americal Division Veterans Association, several of which have been managed by Armed Forces Reunions, Inc.

“If you were in or attached to the Americal you were eligible to be a member of the association,” Allen 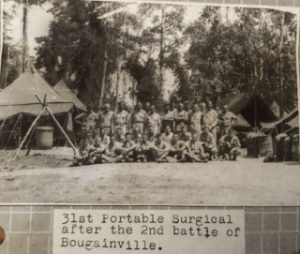 said. “The 1992 reunion in Chicago was very memorable and provided me the opportunity to get reacquainted with other veterans. I saw a doctor I knew that practiced in Chicago and had written about the division, and got to know a vet from the 182nd regiment. The faces were quite different at the August reunion in Bloomington, MN. Time is going by fast now and while there are still 300 WWII members in the association there were only three of us in attendance in Bloomington. But it was a great reunification of the generations.”

Allen retired nearly 30 years ago, but looking back said that what he saw and learned in the war helped guide him through his practice: “My experiences on Bougainville and Emirau really determined the course for the rest of my life. They were harrowing, rewarding and inspired me to a life in medicine. I had the honor to serve fellow troops nearly every day, which proved valuable for working in a small town where I had close relationships with most of my patients. I was pretty much the doctor on the front line for just about anyone who walked through the door.” 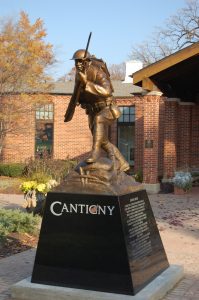 DuPage County offers extraordinary choices for military reunions in the Chicago area.  It’s very easy to head into Chicago from DuPage County, with the area being accessible to major expressways.  Once in Chicago, stop by the Memorial Water Wall, a veterans’ memorial at Soldier Field, and The Museum of Science and Industry, where you can step inside the U-505-the only German submarine in the United States and a national memorial to the 55,000 American sailors who gave their lives on the high seas in WWI and WWII.

No matter the branch of the military, a visit should include Cantigny Park, the magnificent estate of the late Col. Robert R. McCormick, former publisher and editor of the Chicago Tribune.  The U.S. Army’s 1st Infantry comes to life as guests are transported back in time to war-torn France, the Omaha beach, a German bunker and a Vietnam jungle with amazingly realistic, life-sized dioramas.   The First Division Museum is a tribute to all those who have served and continue to serve to protect America’s freedom.  The museum and grounds were fully renovated in 2017. 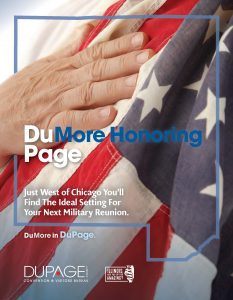 Another incredible experience in DuPage County includes the Naper Settlement-Outdoor History Museum, where history comes to life at this 12-acre museum village with 30 historic structures, including a Victorian mansion, fort, chapel, one-room schoolhouse and working blacksmith and print shops.  Depending on the time of year, you can catch a Civil War re-enactment at one or both (including Cantigny) of these locations.

Other “high” caliber attractions within DuPage County include the Illinois Aviation Museum at Bolingbrook where visitors can view the carefully restored T-2C Buckeye jet trainer aircraft and historic Nieuport 11 replica. See the ongoing restoration of a T-33 in the 6,000 square foot Hanger One.  Chat with WWI Aero Builders Club members about the 3/4 scale Fokker E-III they built to fly in special museum events. 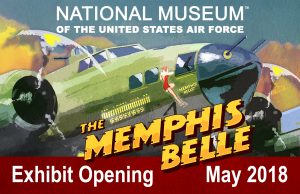 The United States Air Force Museum at Wright-Patterson Air Force Base is the oldest and largest military aviation museum in the world.  The Museum tells the exciting story of aviation development from the days of the Wright brothers at Kitty Hawk to the Space Age.  A large section of the museum is dedicated to pioneers of flight, especially the Wright Brothers, who conducted some of their experiments at nearby Huffman Prairie.  A replica of the Wrights’ 1909 Military Flyer is on display, as well as other Wright brothers artifacts.  The museum’s collection contains many rare aircraft of historical or technological importance, and various memorabilia and artifacts from the history and development of aviation.  Among them is one of four surviving Convair B-36 Peacemakers, the only surviving North American XB-70 Valkyrie and Bockscar – the Boeing B-29 Superfortress that dropped the Fat Man atomic bomb on Nagasaki during the last days of World War II.

One of the most recognizable symbols of World War II, the Memphis Belle, will once again report for duty exactly 75 years after its crew finished their last mission in the war against Nazi Germany on May 17, 1943.  Plans call for the aircraft to be placed on permanent public display in the WWII Gallery of the National Museum of the U.S. Air Force on May 17, 2018.  The new exhibit surrounding the Memphis Belle will include interactive displays, rare archival film footage and many personal artifacts which have never been seen before by our visitors.