Reunions United!  The Wave of the Future 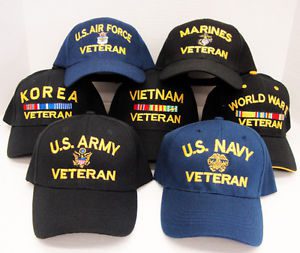 Happy New Year! This year AFR is launching a new program to serve smaller reunions: Reunions United!  Groups sometimes don’t have the numbers to negotiate hotel discounts, meet tour minimums, and have a banquet.  AFR has planned reunions for nearly 30 years and we’ve seen groups get smaller with the years.  We’ve also helped groups continue their reunions by booking them together in a hotel over the same dates.  Each group can have their own banquet but take tours together, enabling groups to see the sights.  Let us know if your group is willing to partner with other groups to get discounts and have tours.  As an example, destroyer reunions might consider squadron reunions.  We’ll maintain a database of groups willing to unite, and where they’d like to meet.

In 2016 we hosted three longtime clients in the same DC hotel: the 104th and 106th Infantry Divisions and the USS Missouri.  We paired the infantry divisions up on tours and each had their own banquet.  In 2017 the 104th Infantry and the USS Missouri both wanted to go west, so they agreed to meet together in Reno.  Since they enjoyed each other’s company so much they decided to share a hospitality room and join for the banquet.  Now there’s camaraderie…a Navy and an Army group joining forces!  Reunions United!

If your military reunion is agreeable to joining forces with other groups to save money and keep the ball rolling then don’t hesitate to register with Reunions United!  You may CONTACT AFR or give us a call at 1-800-562-7226.

The Featured Veteran this month is Bill Copeland, president of the USS Bennington Association. As Bill says, “We used to do the reunions ourselves and they were fun, but a lot of work too. After our first experience with AFR, I vowed we would never have another reunion without AFR.”

The Featured Reunion Destination this month is Chesapeake, VA – the Coastal Virginia region is home to the Atlantic Fleet and the world’s largest naval base, as well as seven additional military installations representing each branch of the US Armed Forces.  Chesapeake is located 15 minutes from the newly renovated Norfolk International Airport with over 200 flights daily.  A short drive to the Virginia Beach oceanfront and downtown Norfolk,  you will find yourself within minutes of regional attractions including Battleship Wisconsin, Nauticus National Maritime Center, Norfolk Naval Base, and the Virginia Air and Space Museum. 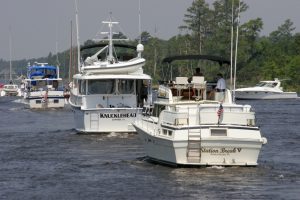 Chesapeake, VA is centrally located in Coastal Virginia, accessible from anywhere in the country.  Here you will find the perfect facilities and attractions for your reunion.  History, cultural activities, beaches, shopping and dining are all at your command.

The Coastal Virginia region is home to the Atlantic Fleet and the world’s largest naval base, as well as seven additional military installations representing each branch of the US Armed Forces.

Chesapeake is located 15 minutes from the newly renovated Norfolk International Airport with over 200 flights daily.  A short drive to the Virginia Beach oceanfront and downtown Norfolk  you will find yourself within minutes of regional attractions including Battleship Wisconsin, Nauticus National Maritime Center, Norfolk Naval Base, and Virginia Air and Space Museum.  Chesapeake is recognized by Money magazine as one of the best cities in America, and consistently recognized as one of the safest cities of its size. 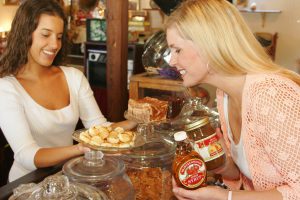 Chesapeake is home to year round events that include the Waterways Heritage Festival, Battle of Great Bridge, Chesapeake Jubilee, Chesapeake, VA Wine Festival and the Dismal Swamp Art Festival.

With over 4,000 rooms at 42 hotels, Chesapeake can accommodate any reunion at any budget.  The Chesapeake CVB offers convenient one-stop shopping.  From pre-site selection assistance and site visit coordination to a number of on-site offerings.  Let us become an extension of your reunion planning committee and help you plan a successful event.  Following are a list of services offered by the Chesapeake CVB, most of these services are complimentary.

If you are interested in hosting your reunion in a destination that is beautiful, affordable, and flexible please click here to learn more.

MEET OUR VETERAN OF THE MONTH: BILL COPELAND

USS Bennington: The Phoenix of the Sea

Like a phoenix of the sea rising from the ashes, the USS Bennington had multiple lives. Named for the Battle of Bennington, Vermont in the American Revolution, the first ship was commissioned as a Yorktown gunboat in 1891 and served in numerous campaigns throughout the Americas, Europe and the Pacific. She was decommissioned, overhauled and re-commissioned in the early 1900s until a deadly boiler explosion spelled her demise and conversion to a barge, before being scuttled at sea in the 1920s. Reborn in 1944 as an Essex-class CV-20 aircraft carrier in the Pacific during World War II, the Bennington helped support the Okinawa campaign and her planes sank two Japanese cruisers and four destroyers, earning three battle stars. Decommissioned after the conflict, she rose again in 1952 as a CVA attack carrier, but two years later an equipment malfunction and explosion off New England killed over 100 crewmen and injured 200 more. Refurbished and modernized in the late ‘50s to CVS-20, the Bennington lived on to fight another decade in Vietnam. Bill Copeland served as an Airman E-3 on the vessel from 1963-’66.

“The USS Bennington had a long – sometimes tragic – but triumphant history,” said Copeland, 72. “We were heading back to the states in ’64 when the Gulf of Tonkin incident hit. Right then we knew we’d be coming back soon and returned to South Vietnam within six months. As a support carrier we provided a lot of search and rescue, and although our crew didn’t face much direct combat, it was hazardous duty on that flight deck as the war heated up. The Bennington played a proud role and went on to earn five battle stars.”

Copeland returned home to Boston after Vietnam and in 1970 the ship was decommissioned for the last time, with almost 80 years under her hull. Nearly 20 years passed before Copeland began a long and ongoing commitment to the vessel. 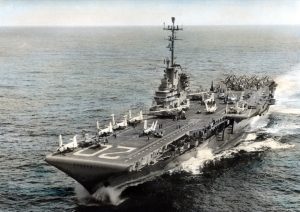 “I’d started working for a new start-up company – Polaroid – thinking I would never hear of the Bennington again, but in 1989 I learned there was going to be a reunion in Pittsburgh,” he said. “I signed up and was surprised to see mostly World War II members, but that turned out to be a good thing. I got to know more of the history of the Bennington, made some great new friends and became very active in the organization, helping host two reunions in its namesake town. The ship had begun another life with the USS Bennington Association, Inc.”

In the early 1990s Copeland was listening to stories from the World War II veterans, who started sharing pictures once they realized he worked for Polaroid. “I heard the stories, made copies of the photos and after a while felt it all needed to be told, so I made the “Bennington War Diary” video, with some unforgettable shots and accounts in a slide show format. Later on, when the Bennington was being towed to India to be scrapped, I was able to get more photos and video and put them together in “Passage to India, the Final Voyage of the USS Bennington,” as a send-off tribute.”

Copeland for the last 10 years has been president of the USS Bennington Association, http://www.uss-bennington.org/reunion.html, which has about 300 sailors and marines, now mostly Vietnam veterans. “Our gatherings are always a great time, a real brotherhood,” he said. “We used to do the reunions ourselves and they were fun, but a lot of work too. In 2013 we were planning to meet aboard the Queen Mary in Long Beach, California when I first heard about Armed Forces Reunions, Inc. We contacted them and after that experience, I vowed we would never have another reunion without AFR. Now it’s nothing but fun, sharing memories and making new ones,” said Copeland, who lives in Zephyr Hills, Florida.

Copeland retired at age 54 from Polaroid and started Studio 47 Video, which he ran for 13 years. He moved from Boston to Florida four years ago and though enjoying his leisure years, still looks toward the sky. “A group of friends and I formed the Valleydale Adventure Club and on Leap Year 2016 we all went skydiving for the first time. We’re going up soon in ultralights. Once an airman, always an airman,” Copeland said.