Everyone loves a scrapper, and it takes a scrapper to have served in World War II, Korea, the Cold War and Vietnam. Col. Howard ‘Scrappy’ Johnson USAF (Ret), now 99, continues to serve his fellow veterans as co-founder of Joint Mission, Inc., a non-profit that provides home furnishings for veterans in south Florida.  Welcome to the 6th season of AFR’s newsletters, the highlight of which are interviews with veterans from groups we serve.  Scrappy co-founded the Red River Valley Fighter Pilots Assn. and AFR will welcome them to Charleston this April.

AFR is kicking off its 32nd year of planning military reunions. If you’re looking for the perfect hotel for your group, we found it long ago and are happy to plug you into our military-friendly network. AFR books many groups every year so we know where reunions are welcome – and we get you the best rates. Hotels pay AFR so it’s free to your group.  Also, we don’t consider hotels that don’t have a great hospitality room where groups can provide their own refreshments. Call and TALK TO TED to find out where your group will find the perfect reunion hotel.  800-562-7226

Our Featured Veteran this month is Col. Howard “Scrappy” Johnson USAF (Ret), who served in four wars and co-founded the Red River Valley Fighter Pilots Association. His theater of prowess was in the clouds. A veteran of World War II, Korea, Cold War and Vietnam, he flew more than 7,000 hours in 15 different fighter planes on more than 200 combat missions.

The Top Destination this month is Norfolk, VA, hometown of Armed Forces Reunions and the world’s largest naval station. Norfolk is also home to Battleship Wisconsin, one of the largest battleships ever built. Go seven decks down in the depths of the battleship to learn what was required to power this massive City at Sea. Also tour the Douglas MacArthur Memorial, the final resting place for General MacArthur and his wife Jean, and a world-renowned museum.

The Must-See Museum is the U.S. Army Transportation Museum, the only museum dedicated to preserving the history of U.S. Army Transportation – from horse-drawn wagons of the Revolutionary War to armored vehicles used today. The collection includes nearly 100 macro artifacts ranging from planes, helicopters, tugboats, and landing craft to trucks, jeeps, hovercraft and trains. 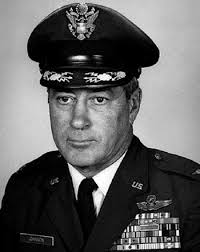 Retired U.S. Air Force Col. Howard C. “Scrappy” Johnson has never been afraid of a fight. He got his nickname from his Sunday school teacher after putting a bully in his place. Scrappy went on to find plenty of fighting while serving in four wars. His theater of prowess was in the clouds. A veteran of World War II, Korea, the Cold War and Vietnam, he flew more than 7,000 hours in 15 different fighter planes on more than 200 combat missions.

After attending the University of Louisville he enlisted in the Aviation Cadet Program of the U.S. Army Air Forces and was commissioned a Second Lieutenant. He served as an instructor and gunnery target pilot at Laredo Army Airfield, Texas, was promoted to captain and deployed to South Korea. There he primarily piloted the F-51 Mustang in 87 combat and bombing missions.

“I didn’t see combat in World War II, but learned a lot from those who had, which helped me going forward,” said Johnson, age 99. “North Korea was brutal from inception and the U.S. was not prepared at the start. We mainly targeted railroads, communication centers and tunnels. On one mission we were ordered to take out a train at all costs and napalmed 13 boxcars of ammunition, but almost ran out of fuel before making it back to base. In Taegu, South Korea we flew out just before being overrun by the North Korean Army.”

Returning stateside in the mid-1950s he became the first pilot to fly over the Arctic Circle in a jet fighter and in 1958 broke the world altitude record in an F-104A Starfighter at 91,249 feet. Major Johnson was presented with the Robert J. Collier Trophy for aeronautical achievement by Vice President Richard Nixon. “Setting a new altitude record and receiving the Collier award is my proudest accomplishment during my years of service,” Johnson said.  Johnson was sent to Southeast Asia in 1966 as an F-105 Thunderchief pilot and Director of Operations for the 388th Tactical Fighter Wing at Korat Royal Thai AFB, Thailand. He flew 117 combat missions over North Vietnam and Laos, mostly flying the F-105 and the F-104 Starfighter.

“I flew a lot of different planes, but the F-104 Starfighter was my favorite,” Johnson said. “It was originally designed to be an interceptor, but used in Vietnam as fighter bomber and really got the job done. It could surpass Mach 2 and when you hit the afterburners it was like a rocket. We hit steel mills, bridges, railroad yards and also provided recon. A lot of targets were around the Red River, which flowed through Hanoi and the most dangerous part of North Vietnam to fly over. We were very luck to never get hit, but close enough to feel many concussions.”

Johnson returned to the U.S. where he finished his career as Director of 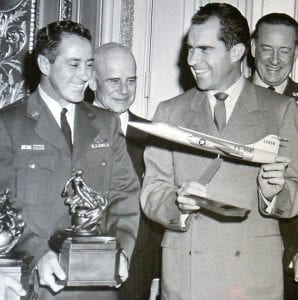 Operations for the F-102 School at Perrin AFB, Texas, retiring in 1972 after 30 years. He received two Silver Stars, two Legions of Merit, seven Distinguished Flying Crosses, and eighteen Air Medals for his service. He was later inducted into the Kentucky and Florida Aviation Hall of Fame: “My two Silver Stars mean the most to me,” he said.

Today Johnson remains in service through his support of U.S. veterans. In 1967 he co-founded the Red River Valley Fighter Pilots Association (River Rats) and became its first president. He still plays an integral part in the organization, which began and remains committed to raising awareness and accounting of MIAs, KIAs and supporting their families. The River Rats Scholarship Program has awarded 1,130 scholarships totaling more than $2.3 million. Their next reunion will be in April in Charleston, South Carolina and managed by Armed Forces Reunions, Inc. (AFR).

“We held our first gathering in 1967 on base in Korat, Thailand, and since then our annual reunions have been in the states,” said Johnson, who lives in Palm Beach Gardens, Florida. “We are dedicated to our founding values and have a great time when we meet. We sing right along with the youngsters when we break out the old River Rat Song Book.”

He also supports veterans as a co-founder of Joint Mission, Inc. (www.jointmissionus.org), a non-profit established by his late wife Elena that provides home furnishings for veterans in south Florida. He uses proceeds and donations from his 2008 book “Scrappy: Memoir of a U.S. Fighter Pilot in Korea and Vietnam” to support the group. Johnson is assisted by his stepdaughter and Joint Mission’s President Kathryn O’Brien, also an Air Force veteran. “I’m determined to live at least until I’m 100 because my anonymous 95 year old war buddy has pledged $1,000 for each of my years – a $100,000 donation to Joint Missions on February 2nd, 2020-  my 100th birthday. I’m not going to miss that.” 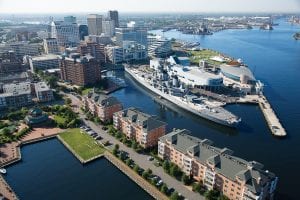 Cruise the Elizabeth River harbor on a Tall Ship or lunch/dinner cruise. 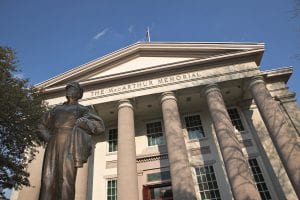 Dine at one of Norfolk’s 80 chef-owned restaurants or sign up for a pub crawl and taste Norfolk’s craft beers. Explore the Chrysler Museum of Art & Glass Studio or experience the annual Virginia International Tattoo. Navy buffs can engage in lively tours of Naval Station Norfolk, the world’s largest naval station and home to more than 100 ships in the Atlantic Fleet. Norfolk is also home to Battleship Wisconsin, one of the largest battleships in the world. And History enthusiasts can tour the Douglas MacArthur Memorial, the final resting place for General Douglas MacArthur and his wife. Visit nearby Jamestown, Yorktown, or Williamsburg. 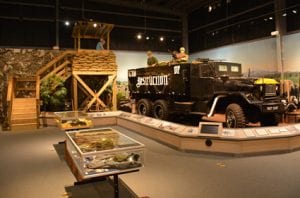 The U.S. Army Transportation Museum is the only museum dedicated to preserving the history of U.S. Army Transportation.  The story of the Army’s Transportation Corps, from horse-drawn wagons of the Revolutionary War to armoured vehicles being used today, is told through exhibits, models and dioramas.  The museum’s artifact collection numbers just under 7,000 objects, plus another 1,000 exhibit props. The collection includes nearly 100 macro artifacts ranging from planes, helicopters, tugboats, and landing craft to trucks, jeeps, hovercraft and trains.

Some of the unique items in the collection include the only surviving gun truck from the Vietnam War and the only surviving hovercraft to see combat in Vietnam. The museum also houses a unique collection of experimental aircraft and the first helicopter to fly at the South Pole.  Approximately 25% of the museum collection comes from general public donations, while the remainder comes through transfers, bequests, and other sources. The museum ranks as one of the largest museums in the Army Museum system and typically has about 25% of the collection on display at any given point in time.

The Marine Park includes landing craft, tugboats, patrol boats, and amphibious craft. Come see the 60 ton BARC amphibious truck or the LCM-6 landing craft that saw service in four wars hauling troops and supplies over beaches all over the world. Experience, the Army’s navy!  The Aviation Pavilion tells the story of aviation development in the Army through helicopters, airplanes, and experimental craft. The Golden Knights jump plane, the oldest Chinook in existence, and President Kennedy’s Army One helicopter are just some of the fascinating aircraft on display.