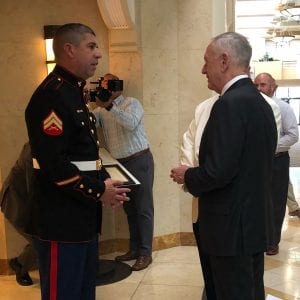 This month is dedicated to the Marines who fought in Vietnam.  AFR hosted the 3/3 RVN Association in Pensacola at the very reunion-friendly Grand Hotel.  We’ve planned the 3/3 reunions for many years, and sadly we didn’t see Oliver North this year as he was likely busy with the NRA.  The group enjoyed tours of the Naval Aviation Museum, Fort Pickens and the city, and of course the beautiful beaches are unmatched.  We also hosted the 1st Battalion 9th Marines Association (“The Walking Dead”) in our nation’s capital.  All Marine Corps groups meet in the summer months in DC due to the 8th and I evening parades only being held from Memorial Day to Labor Day.  1/9 had a dinner for 300 at the National Museum of the Marine Corps in Quantico, attended the Friday evening parade at 8th and I, and their keynote speaker at the annual banquet was the Honorable James N. Mattis, U.S. Secretary of Defense.

Our Featured Veteran this month is Alan ‘Doc’ Sams, whom I met recently at the Pensacola reunion for the 3/3 RVN Association.  Doc tells a compelling and spiritual story about his service in Vietnam, saying “It took me a long time to realize the acts of Willie Adger and John Mick were God’s intervention.  That I survived Vietnam was a miracle and turned out to be the seed of my salvation.”

The Top Destination this month is Savannah, a city rich in history and culture and home to the Mighty Eighth Air Force Museum, which features over 90,000 sq. feet of exhibits, interactive displays, historical artifacts & a magnificent collection of aviation art.

The Must-See Museum this month is the EAA Aviation Museum, one of the most extensive aviation museums in the world, with more than 50 aircraft on display and in some cases flying at Pioneer Airport. 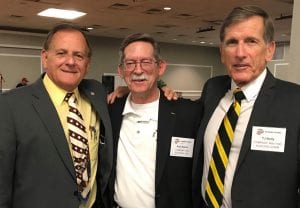 The answer to why a friend, fellow platoon member and Christian died in Vietnam next to non-believer Alan “Doc” Sams came years later.  Arriving in Vietnam on Thanksgiving Day in 1967, Sams served as a corpsman in the 2nd Platoon, Kilo Company, 3rd Battalion, 3rd Marines.  While he saw enemy fire or combat action nearly every day, the perils of war dramatically escalated one week after the start of the Tet Offensive in early 1968.

Marine engineers were building a supply road to serve Alpha 3 base along the southern DMZ and Sams was assigned with Kilo to provide security for the sweep.  An enemy bunker complex was soon discovered, followed by an eerie feeling the North Vietnamese Army was close by.  That feeling became reality and literally hit home in late morning on February, 7th.  “It started with one rocket propelled grenade, followed by tracer bullets over our heads and then all hell broke loose in a torrent of grenades, mortars and constant small arms fire,” said Sams, now 72.  “I soon heard the ‘Corpsman up!’ call and found a dead Marine, another with an arm blown off, one who lost an eye and another I performed a tracheostomy on.

The battle heated up even more and our platoon became stretched out into an L shape, before being overrun and cut off from the other units.  We had lost radio contact and were basically trapped and surrounded in a dire situation.  I got another call up and reached my friend Willie Adger who was the last soldier holding up the rear of the L.  Of strong Christian faith the last thing I heard him say very quietly and without anxiety was ‘Doc, I’m hit’ before slumping over with a bullet hole between his eyes.  I feel he saved my life by holding down the fort to the end and alerting me to escape any way possible.”

Sams and four other wounded Marines somehow survived a night of battle, but were still not out of the woods.  Marine artillery and tanks had taken it to the enemy and in the morning were mopping up remaining NVA.  “We could hear our boys close by and knew they’d cut down anything that moved, so I just started screaming cuss words, rose on my knees and they held fire,” Sams said.  “John Mick of Mike Company essentially rescued us.  We medevaced the four Marines out but lost 29 of our 50 man-platoon.”  Miraculously, Sams wasn’t wounded. 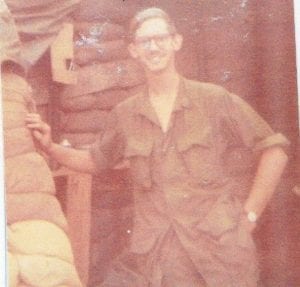 Sams remained in the field and saw more, but less severe, combat before transferring to the MASH-like 3rd Medical Battalion in Phu Bai.  He left Vietnam in November, 1968 and was released from the Marines as a Petty Officer Second Class in 1970 with a Bronze Star with combat “V” and Combat Action Ribbon.  Sams returned to the states and graduated from what was then the new Physician Assistant program at Duke University and then worked for 30 years at Emory University Hospital before retiring in 2004.

His life had changed, however, as he found the Lord in 1987.  “It was a slow process because I had never been religious and just thought trying to be a good person was enough,” he said.  “My wife Diane had accepted Jesus 10 years earlier and while watching Pastor Charles Stanley program on TV I felt he was talking directly to me.  Thoughts of that day, night and morning in Vietnam vividly returned to me and were an important part of my new life.  Later I saw on the 3/3 website that Willie Adger’s brother was looking to talk with anyone who had served with Willie.  I contacted him and said Willie died saving my life, which was a moment of joy for his brother and their terminally ill mother.”

Earlier this month in Pensacola, Florida Sams reconnected with fellow veterans at this year’s 3/3 RVN Association reunion, many of which have been managed by Armed Forces Reunions, Inc. He saw platoon Captain Don Frank, John Mick from Mike Company and many others.  “It’s just wonderful to get together as we’ve all become family and many have found the Lord,” said Sams, who lives in Atlanta.  “We of course talked about the ambush, still trying to put the pieces together from that tragic day.”

Sams and his wife are members of non-denominational Cornerstone Bible Church in Lilburn, Georgia and he often shares his story of Feb. 7th and 8th in 1968.  “It took me a long time to realize the acts of Willie Adger and John Mick were God’s intervention.  That I survived Vietnam was a miracle and turned out to be the seed of my salvation,” Sams said. 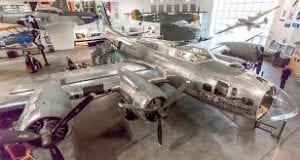 Savannah has always been a city rich in history and culture, and has America’s finest ‘living’ collection of eighteenth and nineteenth century buildings.  Discover Savannah’s garden-like public squares, the crown jewels of General Oglethorpe’s planned city.  Beautiful streets and squares reveal more than 250 years of history, displayed in exquisite ironwork, ancient cobblestones, splendid mansions, and picturesque cottages.  On the waterfront you will discover cobblestone-paved Factors Walk and River Street, where old cotton warehouses have been converted into shops, taverns, restaurants, and museums.  Visit historic Tybee Island, Savannah’s quiet beach community and stop at the Tybee Island Lighthouse and Museum.  Not just for the historian, everyone will enjoy the refreshing ocean breezes while viewing the natural beauty and coastal wildlife. Visit Old Fort Jackson, Georgia’s oldest standing brick fortification and a National Historic Landmark, with cannon firings and daily interactive programs.

Located only minutes from downtown Savannah, where the Eighth Air Force was activated in 1942,

the Mighty Eighth Air Force Museum features over 90,000 sq. feet of exhibits, interactive displays, historical artifacts & a magnificent collection of aviation art. See a visually realistic mission experience, a world-renowned Research Center and beautiful Memorial Gardens.  The World War II B-17 Flying Fortress the, “City of Savannah,” is undergoing a complete restoration inside the Museum’s Combat Gallery. Come be a part of history in the making! 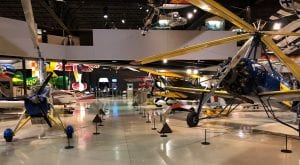 The EAA Aviation Museum, in Oshkosh, WI north of Milwaukee, is one of the most extensive aviation museums in the world, with world-class displays and galleries.  Marvel at aviation innovations in a collection of more than 200 historic airplanes.  Spend time in one of four movie theaters.  The restoration, preservation, and operation of vintage aircraft have been part of EAA since the very beginning. In addition to the more than 50 aircraft on display (and in some cases flying) at Pioneer Airport, the main museum building showcases a number of aircraft and artifacts from the golden age of aviation.

The first major exhibit encountered by visitors is EAA’s tribute to the genius of the Wright Brothers – a highly accurate replica of the Wright Flyer, surrounded by exhibits and audio-visual displays telling their story.  Witness a piece of history in the Eagle Hangar, a hall of honor dedicated to the memory of those who served valiantly in WWII. The airplanes include examples of Allied fighters, bombers, liaison aircraft, trainers, Army and Navy aircraft, plus examples from Germany and Japan.  The Innovations Gallery displays and celebrates a wide variety of aircraft at the cutting edge of aviation achievement. The airplanes in this gallery have broken dozens of world records – the fastest, the highest, the furthest, and even the smallest.  Dick Rutan and Jeanna Yeager’s globe-circling flight in the Voyager is a case in point. Under the guidance of Burt Rutan, this remarkable aircraft was built by a handful of people incorporating common homebuilding technology.  The Voyager exhibit features an accurate replica of the aircraft that accomplished the first non-stop, non-refueled flight around the world in 1986. Visitors can look inside the spartan cockpit where the crew lived for nine days.