It’s great to be back in the swing of things and on the road with the onset of the reunion season. So far this month we’ve had some really fantastic reunions: the 50th anniversary VAL-4 reunion in Pensacola, the Red River Valley Assn. in Charleston, and the Golden Eagles (Early & Pioneer Naval Aviators Assn.) in Dallas/Ft. Worth.  This week we have two U.S. Navy Reserve Returning Warrior Workshops – in Norfolk and San Antonio – where we’ll help thank our reservists for their recent deployments and their support persons for keeping the home fires burning. I can’t wait to be in San Diego in early May with a unique Three Sisters reunion (USS Midway, USS Coral Sea, and USS FDR), with the main banquet being on the Flight Deck of the USS Midway. As you and your group look to potential sites for 2020 and beyond please keep AFR in mind. For over thirty years we’ve successfully steered groups to reunion-friendly hotels.  Feel free to call and TALK TO TED at 800-562-7226 or 757-625-6401.

Our Featured Veteran this month is Chaplain (Col.) James A. Buckner, US Army Ret., past first vice-president of The U.S. Army Chaplain Corps Regimental Association, Inc. We’ve planned events for them in Kansas City, San Antonio, and Washington DC. Chaplain Buckner faced one of his toughest challenges during the 9/11 attack on the Pentagon. “It was a very grim situation and required a 24-hour center to address the grief, anxiety and shock.”

The Top Destination this month is Reno, Nevada – “The Biggest Little City in the World.”  Visit Carson City and the Nevada State Museum, focusing on the rich natural and cultural heritage of the “Silver State.” Tour Virginia City, the gaudiest boomtown of the Old West, and enjoy the beautiful scenery of Lake Tahoe named “America’s Best Lake” by USA Today.

The Must-See Museum is the Evergreen Aviation & Space Museum in McMinnville, OR (near Portland) – home to an extensive collection of military aircraft, artifacts, and the mighty Spruce Goose, a symbol of American industry during World War II and the centerpiece of the Museum. 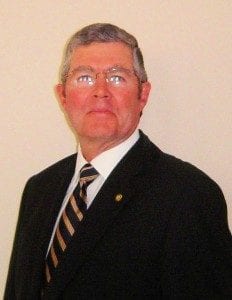 The many jobs of a U.S. Army chaplain include providing spiritual guidance, counseling and support to soldiers and their families, advising the commander, and giving direction to chaplains assistants. Army Chaplain (Colonel) James A. Buckner faced one of his toughest challenges while serving as Director of Plans, Policy Development and Training for the Chief of Chaplains during the 9/11 attack on the Pentagon.

“The Army was tasked with caring for the victims and their family members during those difficult days. There was an incident tent that provided religious services and counseling for those engaged in recovery operations” Buckner said. “It was a very grim situation. Many were facing grief, anxiety and shock. Soldiers were tasked with recovering the fallen, and their possessions. It was horrific and soul searching for everyone involved.”

Buckner’s strong faith began as a child and led him to the seminary. “I never thought about military service growing up, though my father had served in WWII. However, in seminary an active duty Army chaplain influenced me to explore the Army Chaplaincy.” In 1975 Buckner was commissioned as a Second Lieutenant in the Chaplain Candidate Program, and called to active duty in 1977. Buckner served stateside and then in Germany before returning home and obtaining a master’s degree in Marriage and Family Counselling. Assigned to the Army Chaplain’s School, he taught counseling skills and wrote doctrine addressing the chaplain’s role in combatting battle fatigue. Promoted to Major, became 3rd Infantry Division Artillery Chaplain in Germany, and was then selected to serve as the Executive Officer for the United States Army Europe Chaplain in Heidelberg.

While he did not personally see combat in his 31 years of service and dozens of assignments, many of the chaplains under him did, especially in the Middle East and Somalia. “Chaplains go where soldiers are. They face the same dangers and the same hardships.” Buckner said. “They see and experience the carnage, brutality and all that is war. They serve soldiers with counsel, prayer, communion, worship and friendship. They advise the commander on religious issues.”

Images and emotions from conflict can be carried for years and soldiers often bring trauma, stress and guilt home, which can negatively impact love ones. “Night terrors, hallucinations, feeling threatened and startled can cause challenges to family relationships.” Buckner said. “The chaplaincy partners with families, medical professionals and social agencies to help ameliorate the issues. Soldiers often find help and strength from their faith communities.”

After serving as the Division Chaplain for the 10th Mountain Division he was assigned as the first chaplain for the Center for Health Promotion and Preventive Medicine, promoted to Colonel and then reassigned as the 5th Army Staff Chaplain. After graduating in 2000 from the U.S. Army War College he was reassigned to the Chief of Army Chaplain’s Office in Washington DC to serve as the Director of Plans, Policy Development and Training – there he was the Chaplain representative for all of the funeral honors paid to President Ronald Reagan. 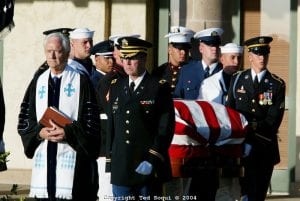 Buckner, on right, at Funeral for President Ronald Reagan

clergy are in the right place in order to perform their religious duties. The military chaplain escorts the casket wherever it goes. In the case of the funeral for President Reagan, we traveled from California to DC and back to California. It was my distinct honor to escort a former president to his final resting place.”

In 2006, while still serving the Chief of Army Chaplains in Washington DC, Buckner performed the funeral services of Reagan’s Secretary of Defense Caspar Weinberger. Buckner’s final assignment was Staff Chaplain for the Army Installation Management Command. His medals include the Legion of Merit with one oak leaf cluster, scores of Meritorious Service Medals and the Army Accommodation Medal the Army Achievement Medal.

After military service Buckner became pastor of Gilwood Presbyterian Church in Concord, North Carolina. He is now retired, but continues to serve the Presbyterian church by preaching, and serving on committees in the Charlotte Presbytery. He remains in service to the Army as a past First Vice President and member of The U.S. Army Chaplain Corps Regimental Association, Inc., which holds reunions at locations across the country every two years. The reunions are managed by Armed Forces Reunions, Inc.

“We started our gatherings some 10 years ago mainly as a conference to review the state of the chaplaincy,” said Buckner, 70, who lives with his wife Lou in Huntersville, North Carolina. “The most meaningful part of the reunion is the memorial service, where we honor those who have passed since the last reunion.  It’s a somber moment that reminds us of those who, like us, answered the call to serve our soldiers and their families.” 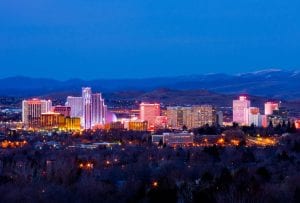 Dubbed “The Biggest Little City in the World,” Reno is known for its casinos and its proximity to Lake Tahoe and its ski resorts. Downtown’s National Automobile Museum showcases more than 200 vintage cars and the MidTown District is lined with shops and restaurants. In the Botanical Garden, take a stroll along the pathway that winds past a garden that’s a favorite perch of native songbirds. North of downtown, Animal Ark is a sanctuary for rescued bears, cheetahs and other wildlife. Visit Carson City, Nevada’s state capital, and drive by some of its historic homes and buildings, before stopping at the Nevada State Museum. This museum focuses on the rich natural and cultural heritage of the “Silver State.” You’ll learn about the mining industry, local wildlife, the Carson City Mint and more!

Tour Virginia City, the gaudiest boomtown of the Old West and where Mark Twain cut his literary 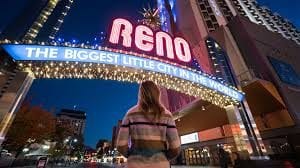 teeth. Miraculously, the town looks much the same as it did in the 1860’s, from the wobbly saloons built on stilts to the well-trodden boardwalks of the main street.  Then enjoy the beautiful scenery of Lake Tahoe and a cruise aboard the M.S. Dixie II, one of Lake Tahoe’s largest and most sophisticated cruise vessels. Named “America’s Best Lake” by USA Today, Lake Tahoe is the largest alpine lake in North America. It’s also known as the most photographed lake in the country. It’s deep and wide, bluer than blue, and surrounded by the majestic Sierra Nevada Mountains. 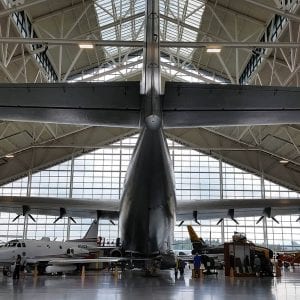 The Evergreen Aviation & Space Museum in McMinnville, OR (near Portland) seeks to honor the patriotic service of the men and women who serve our country. The museum takes great pride in its extensive collection of military aircraft, artifacts, and exhibits. Whether participating in battle or providing support, these military aircraft and helicopters served an important role in U.S. military history. Building a successful military also means developing support systems for transporting soldiers, weapons, and supplies; executing effective reconnaissance; and training soldiers to the top of their ability. Learn more about the important roles that aircraft played as part of the museum’s expansive military exhibit.

airplane. Built entirely of wood due to wartime restrictions on metals, the Spruce Goose stands as a symbol of American industry during World War II and is the centerpiece of our Museum. Explore the Titan II Missile, a large booster rocket from inside its missile silo, and then experience the excitement of a simulated launch sequence from the launch room. Also see the SR-71 Blackbird, one of the world’s fastest aircraft. This high-altitude reconnaissance plane flew at the very limits of the earth’s atmosphere at speeds well over 2,000 miles per hour. While the museum’s aircraft, exhibits, and artifacts offer stunning examples of aviation achievement, it also strives to create an environment that not only teaches children, youth, and adults about aircraft, but also demonstrates the importance of human skills like mathematics, science, teamwork, determination, and perseverance.