How to Start a Reunion!

It seems like nearly every week someone contacts AFR seeking guidance in how to start a reunion. Most reunions today begin on social media, usually with a Facebook page. It’s amazing how quickly former comrades can be found using social media. After finding a sufficient number of ‘members’ and discussing the potential for having a reunion all that’s needed is a survey, which can be done using a number of tools such as Survey Monkey. When I founded AFR in the 80s most groups got their start by going to the library and pouring through phone books for former buddies.

It’s important to get a good start so folks will spread the word and want to attend a future reunion. Initially, just getting folks together in a reunion-friendly hotel with a gathering area (hospitality room) available 24/7 is critical. A banquet on the final night should be planned. At follow-up reunions you might consider planning tours and seeing the sights – to make it more vacation-like, and keeping spouses interested.

Survey results are important when securing a hotel contract for a group. How many members are likely to attend? Suggest two or three cities for folks to vote on. How many nights to book (most groups start with three)? This is where AFR comes in. Having planned thousands of reunions in over 150 cities over the past 30 years we can steer you to a reunion-friendly hotel in the city you want to be. Get a professional on your side to negotiate the hotel contract for you – to ensure you have an adequate room block, the proper meeting space for a banquet, and importantly that you have a great hospitality room where you are allowed to provide your own refreshments if you want. Reunions happen in the hospitality room!

For help getting your reunion off the ground please feel free to CONTACT US any time.

The Featured Veteran this month is Albert E. Audette, a radio gunner in the bowels of a B-17 with the 385th Bomb Group of the Eighth Air Force. Going strong at 95 we look forward to seeing Al in New Orleans at the 8th Air Force Historical Society reunion 9/27-10/1. AFR has planned their reunions since 1993. Al received numerous medals including the Air Medal with four clusters, two Distinguished Flying Crosses and the American Battle Star; three years ago he was inducted into the French Legion of Honor for service over France.

The Featured Reunion Destination this month is Tucson – home to the Pima Air Museum. Yes, Tucson has world-class resorts, destination spas and hotels, but it also has airplane hangars, working cattle ranches, desert gardens and historic theatres. You don’t go to Tucson to do the ordinary, the expected. That’s not what Tucson is about.

The Must-See Museum this month is the national WWII Museum in New Orleans, and the highlighted Gem of a Museum is the Buffalo Naval Park, where the USS Little Rock and USS The Sullivans are open to the public. 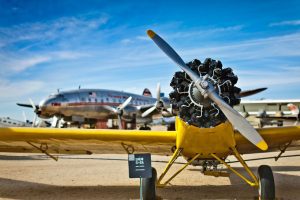 You’ve probably heard something about Tucson lately. In the pages of meetings publications like USA Today, the New York Times, Wine Enthusiast, Food Network Magazine or The Guardian, or possibly from someone who had their own successful reunion here, Tucson is a city that’s having a moment.

Finding a place to have your reunion isn’t just a matter of who has rooms and where. That’s not what makes for a great event. It’s about culture, the opportunity to have a real experience. Tucson is a city that offers opportunities outside the meeting room and conference center. Yes, we have world-class resorts, destination spas and hotels, but we also have airplane hangars, working cattle ranches, desert gardens and historic theatres. You don’t come to Tucson to do the ordinary, the expected. That’s not what we’re about.

Tour the ruins at Tubac Presidio State Historic Park, the 18th-century Spanish colonial presidio, and at Fort Bowie, a key U.S. Calvary outpost during the territorial dispute between the Chiricahua Apache American Indians and the U.S. Army. Visit the artifact-filled museum and ruins at Fort Lowell, established in 1873, and then learn about the Buffalo Soldiers at Fort Huachuca Museum in nearby Sierra Vista. 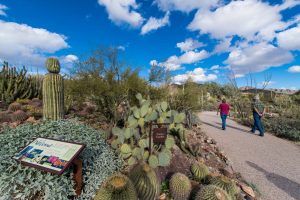 Stop at Pima Air & Space Museum, one of the world’s largest privately funded aerospace museums spread over 80 acres, where visitors rave about the hands-on exhibits and tours. Tour over 300 historical aircrafts, from a Wright Flyer to a 787 Dreamliner, at the AMARG “Aircraft Boneyard,” a favorite location for filmmakers.

Head underground to the Titan Missile Museum to explore the only preserved launch complex of the country’s 54 original missile sites. What was once one of America’s most top secret places is now a National Historic Landmark, fulfilling its new mission of bringing Cold War history to life for millions of visitors from around the world.

MEET OUR VETERAN OF THE MONTH: B-17 RADIO GUNNER ALBERT E. AUDETTE 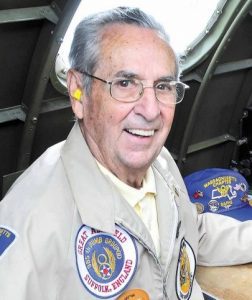 Albert E. Audette remembers the early winter of 1944 like it was last year. A radio gunner in the bowels of a B-17 with the 385th Bomb Group of the Eighth Air Force, Audette and a 10-man crew had dropped payloads against Germany’s war machine from Norway to France. Hitting chemical factories, ammunition depots, ball-bearing plants, submarine pens and other military industrial installations, they’d fought through onslaughts of artillery flak and Messerschmitt fighters. On February 28th they were trying to hone in on a V-2 rocket site in the remote French countryside.

“The weather had us virtually blind, so we dropped to about 8,000 feet to get a better view, but that gave the Germans a look at us,” recounted Audette, 95, who served in the 548th squadron. “Tremendous flak took out two engines and another was feathering, but we weren’t going down over occupied France and headed for the English Channel. We lightened the ship, throwing out our parachutes, guns, ammo and anything we could, but it wasn’t enough. We hit the water at 120 miles an hour and tore off the plane’s tail. I signaled our location and then got to the raft. When the rescue ship retrieved us my hands froze to the ladder, but we were very lucky, everyone survived.”

Soon back in the fray, they continued strategic bombing across Europe, including more attacks on V-2 installations. A crucial part of a radio gunner’s job was to maintain silence as much as possible while still transmitting vital information, and manning the gun when needed. “Silence could mean survival and mission success, the machine gun was secondary,” Audette said. “I really couldn’t see a lot of the German fighters from inside the radio compartment and got off rounds when I could. But I certainly could feel the flak, which rattled the hell out of us, like waves of exploding asphalt.”

The crew looked toward the proverbial light at the end of the tunnel as they neared their 25th and final mission, but that was short-lived: “General Doolittle upped the count to 30 and needless to say, we weren’t thrilled. After making it through and returning home, I literally kissed the ground.”

Receiving numerous medals, including the Air Medal with four clusters, two Distinguished Flying Crosses and the American Battle Star, Audette left the service as a technical sergeant and married Priscilla in 1945. Utilizing the GI Bill and graduating from the Rhode Island School of Design, he enjoyed a successful career as an engineer for GE and then Western Electric before retiring in 1985. He reconnected with his wartime past in the mid-‘90s when he joined the 385th Bomb Group Association and later served as president for two years. The bomb group meets in conjunction with the Society of the Eighth Air Force, which is managed by Armed Forces Reunions.  The next gathering is late September in New Orleans and Audette plans on being there. “In the earlier years we’d share all our war stories, always learning about new things the guys in other squadrons had done,” he said. “They published a lot of the stories in the military magazines. The reunions are still wonderful occasions, but the ranks are a lot thinner now. I think it’s been about a decade since I last saw a member of our crew.”

As the sole survivor, Audette three years ago was inducted in the French Legion of Honor for service over France. “That was a very proud moment, the TV stations came to my home, but it was really for the whole crew,” he said.

Audette and Priscilla live in Woburn, Massachusetts, married 72 years and counting.  In addition to the 385th, he’s an ardent member of the local Elks Lodge, has taken up chess again and enjoys a range of pursuits. His advice when asked for the path to a long life: “Stay socially engaged and physically active, and eat healthy. I’ve been very lucky, and my wife keeps me well fed.” 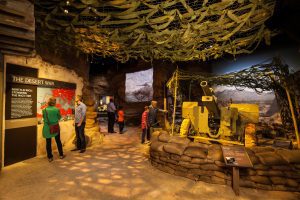 The National WWII Museum’s exhibits cover the epic and global scale of the war that changed the world, in a voice that is intimate and personal right in the heart of New Orleans. Exhibits not only highlight the role of world leaders, but also the everyday men and women who found the strength and courage to accomplish the extraordinary.

Currently housed in three buildings, each arranged around central themes of the war, Museum exhibits offer visitors an opportunity to experience the war through the eyes of the men and women who lived it. Interactives, oral histories and personal vignettes add a meaningful perspective.

Even before The National WWII Museum opened its doors in 2000, founder Dr. Stephen E. Ambrose had already begun to amass artifacts collected from veterans as he interviewed them. Now, the Museum’s vault houses more than 100,000 artifacts. While many items in the collection — including but not limited to Allied and Axis uniforms, weaponry, vehicles, medals, diaries, letters, artwork, photographs and other mementos — are on exhibit, the majority are kept safely in storage to be used for research and future exhibitions, or are being restored to their original condition. With one of the richest historical museums in New Orleans, exhibits from The National WWII Museum span the years leading up to and following the war. The Museum has a large collection of memoirs of wartime experiences, as well as an impressive collection of oral histories conducted with veterans from all branches and who served on all fronts. Learn more by visiting the museum’s website.

The Navy donated to the City of Buffalo the destroyer USS The Sullivans and the Guided Missile Cruiser USS Little Rock in 1977. Thus was born the Buffalo & Erie County Naval & Military Park, designated a National Historic Landmark. The Park acquired the WWII submarine USS Croaker (SS/SSK-246) in 1988.

Armed Forces Reunions has planned the USS Little Rock reunions since their first reunion in Buffalo in 1992. This coming September the new USS Little Rock (LCS-9) will be commissioned alongside her namesake in Buffalo.  We and the crew of USS Little Rocks past are excited to welcome the LCS-9 to the family with a reunion headquartered at the Adam’s mark Buffalo.